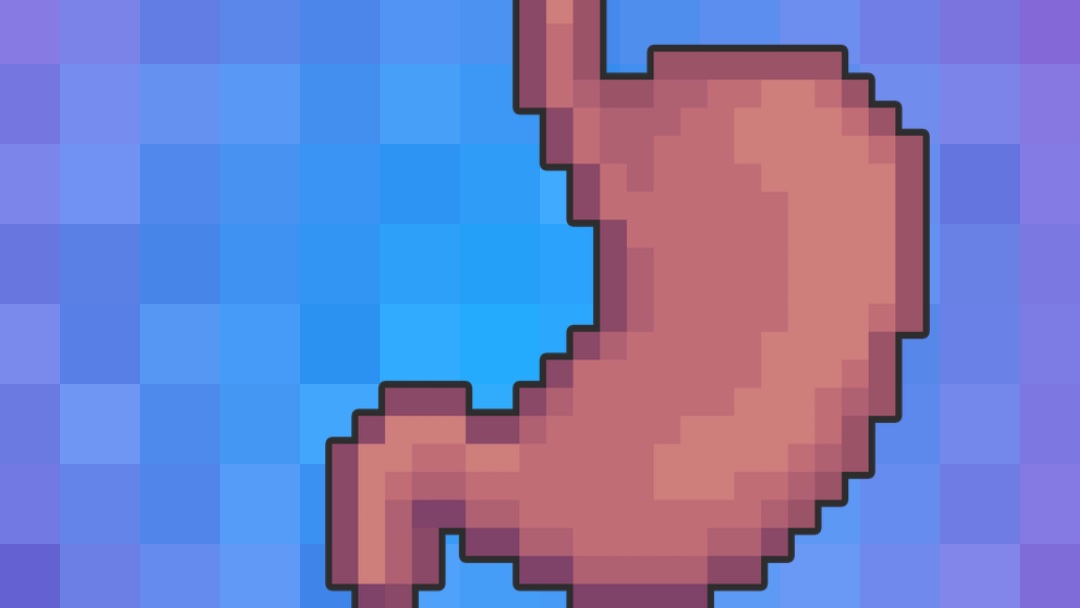 Abdominal examination frequently appears in OSCEs and you’ll be expected to pick up the relevant clinical signs using your examination skills. This abdominal examination OSCE guide provides a clear step-by-step approach to examining the gastrointestinal system, with an included video demonstration.

Adjust the head of the bed to a 45° angle and ask the patient to lay on the bed.

Adequately expose the patient’s abdomen for the examination from the waist up (offer a blanket to allow exposure only when required and if appropriate, inform patients they do not need to remove their bra). Exposure of the patient’s lower legs is also helpful to assess for peripheral oedema.

Inspect the palms for any of the following signs:

Inspect the nails for any of the following signs:

Finger clubbing involves uniform soft tissue swelling of the terminal phalanx of a digit with subsequent loss of the normal angle between the nail and the nail bed. Finger clubbing is associated with several underlying disease processes, but those most likely to appear in an abdominal OSCE station include inflammatory bowel disease, coeliac disease, liver cirrhosis and lymphoma of the gastrointestinal tract.

Asterixis (also known as ‘flapping tremor’) is a type of negative myoclonus characterised by irregular lapses of posture causing a flapping motion of the hands. In the context of an abdominal examination, the most likely underlying cause is either hepatic encephalopathy (due to hyperammonaemia) or uraemia secondary to renal failure. CO2 retention secondary to type 2 respiratory failure is another possible cause of asterixis.

Place the dorsal aspect of your hand onto the patient’s to assess temperature:

To assess for Dupuytren’s contracture:

Inspect the patient’s arms for the following:

Whilst supporting the patient’s arm, inspect each axilla for the following:

Ask the patient to gently pull down their lower eyelid and inspect for signs suggestive of gastrointestinal pathology:

Ask the patient to open their mouth and inspect for signs suggestive of gastrointestinal pathology:

The left supraclavicular lymph node (known as Virchow’s node) receives lymphatic drainage from the abdominal cavity and therefore enlargement of Virchow’s node can be one of the first clinical signs of metastatic intrabdominal malignancy (most commonly gastric cancer). The right supraclavicular lymph node receives lymphatic drainage from the thorax and therefore lymphadenopathy in this region can be associated with metastatic oesophageal cancer (as well as malignancy from other thoracic viscera).

Palpate the supraclavicular fossa on each side, paying particular attention to Virchow’s node on the left for evidence of lymphadenopathy.

Inspect the patient’s chest for signs suggestive of gastrointestinal pathology:

Position the patient lying flat on the bed, with their arms by their sides and legs uncrossed for abdominal inspection and subsequent palpation.

Inspect the patient’s abdomen for signs suggestive of gastrointestinal pathology:

If a stoma is present, assess the following characteristics:

Light palpation of the abdomen

Lightly palpate each of the nine abdominal regions, assessing for clinical signs suggestive of gastrointestinal pathology:

Deep palpation of the abdomen

Palpate each of the nine abdominal regions again, this time applying greater pressure to identify any deeper masses. Warn the patient this may feel uncomfortable and ask them to let you know if they want you to stop. You should also carefully monitor the patient’s face for evidence of discomfort (as they may not vocalise this).

If any masses are identified during deep palpation, assess the following characteristics:

2. Ask the patient to take a deep breath and as they begin to do this palpate the abdomen. Feel for a step as the liver edge passes below your hand during inspiration (a palpable liver edge this low in the abdomen suggests gross hepatomegaly).

3. Repeat this process of palpation moving 1-2 cm superiorly from the right iliac fossa each time towards the right costal margin.

4. As you get close to the costal margin (typically 1-2 cm below it) the liver edge may become palpable in healthy individuals.

If you are able to identify the liver edge, assess the following characteristics:

There is a wide range of possible causes of hepatomegaly including but not limited to:

Palpation of the gallbladder can be attempted at the right costal margin, in the mid-clavicular line (the tip of the 9th rib). If the gallbladder is enlarged, a well-defined round mass that moves with respiration may be noted. Tenderness suggests a diagnosis of cholecystitis whereas a distended painless gallbladder may indicate underlying pancreatic cancer (particularly if also associated with jaundice).

1. Position your fingers at the right costal margin in the mid-clavicular line at the liver’s edge.

2. Ask the patient to take a deep breath.

If the patient suddenly stops mid-breath due to pain, this suggests the presence of cholecystitis (known as “Murphy’s sign positive”).

2. Ask the patient to take a deep breath and as they begin to do this palpate the abdomen with your fingers aligned with the left costal margin. Feel for a step as the splenic edge passes below your hand during inspiration (the splenic notch may be noted).

3. Repeat this process of palpation moving 1-2 cm superiorly from the right iliac fossa each time towards the left costal margin.

In healthy individuals, you should not be able to palpate the spleen. A palpable spleen at the edge of the left costal margin would suggest splenomegaly (for the spleen to be palpable at this location it would need to be approximately three times its normal size).

There is a wide range of possible causes of splenomegaly including but not limited to:

1. Place your left hand behind the patient’s back, below the ribs and underneath the right flank.

2. Then place your right hand on the anterior abdominal wall just below the right costal margin in the right flank.

4. Ask the patient to take a deep breath and as they do this feel for the lower pole of the kidney moving down between your fingers. This bimanual method of kidney palpation is known as balloting.

5. If a kidney is ballotable, describe its size and consistency.

6. Repeat this process on the opposite side to ballot the left kidney.

In healthy individuals, the kidneys are not usually ballotable, however, in patients with a low body mass index, the inferior pole can sometimes be palpated during inspiration.

1. Using both hands perform deep palpation just superior to the umbilicus in the midline.

2. Note the movement of your fingers:

This is a crude clinical test and further investigations would be required before a diagnosis of an abdominal aortic aneurysm was made.

Before performing bladder palpation, allow the patient the opportunity to go to the toilet. Warn the patient that palpation may be uncomfortable and bring about the sudden urge to pass urine.

A distended bladder can be palpated in the suprapubic area arising from behind the pubic symphysis (e.g. urinary obstruction/retention). In most healthy patients who are passing urine regularly, the bladder will not be palpable.

1. Percuss upwards 1-2 cm at a time from the right iliac fossa (the same position used to begin palpation) towards the right costal margin until the percussion note changes from resonant to dull indicating the location of the lower liver border.

2. Continue to percuss upwards 1-2 cm at a time until the percussion note changes from dull to resonant indicating the location of the upper liver border.

3. Use the knowledge of the upper and lower border of the liver to determine its approximate size.

Percuss upwards 1-2 cm at a time from the right iliac fossa (the same position used to begin palpation) towards the left costal margin until the percussion note changes from resonant to dull indicating the location of the spleen (in the absence of splenomegaly the spleen should not be identifiable using percussion).

Percuss downwards in the midline from the umbilical region towards the pubic symphysis. A distended bladder will be dull to percussion allowing you to approximate the bladder’s upper border.

Percussion can also be used to assess for the presence of ascites by identifying shifting dullness:

1. Percuss from the umbilical region to the patient’s left flank. If dullness is noted, this may suggest the presence of ascitic fluid in the flank.

2. Whilst keeping your fingers over the area at which the percussion note became dull, ask the patient to roll onto their right side (towards you for stability).

3. Keep the patient on their right side for 30 seconds and then repeat percussion over the same area.

4. If ascites is present, the area that was previously dull should now be resonant (i.e. the dullness has shifted).

Auscultate over at least two positions on the abdomen to assess bowel sounds:

Auscultate over the aorta and renal arteries to identify vascular bruits suggestive of turbulent blood flow:

“Today I examined Mrs Smith, a 64-year-old female. On general inspection, the patient appeared comfortable at rest, with no evidence of abdominal distension or jaundice. There were no objects or medical equipment around the bed of relevance.”

“The hands had no peripheral stigmata of gastrointestinal disease and were symmetrically warm. There was no evidence of asterixis.”

“The pulse was regular at 70 beats per minute.”

“The arms did not have any evidence of bruising or excoriations and the axillae were unremarkable.”

“On inspection of the face, there were no stigmata of gastrointestinal disease.”

“There was no evidence of lymphadenopathy in the supraclavicular region.”

“Closer inspection of the chest did not reveal any stigmata of gastrointestinal disease.”

“On inspection of the abdomen, no scars, distension or hernias were noted. Abdominal palpation and percussion were unremarkable with no evidence of organomegaly. Bowels sounds were normal and no bruits were noted.”

“There was no evidence of peripheral oedema on the assessment of the legs.”

“In summary, these findings are consistent with a normal abdominal examination.”