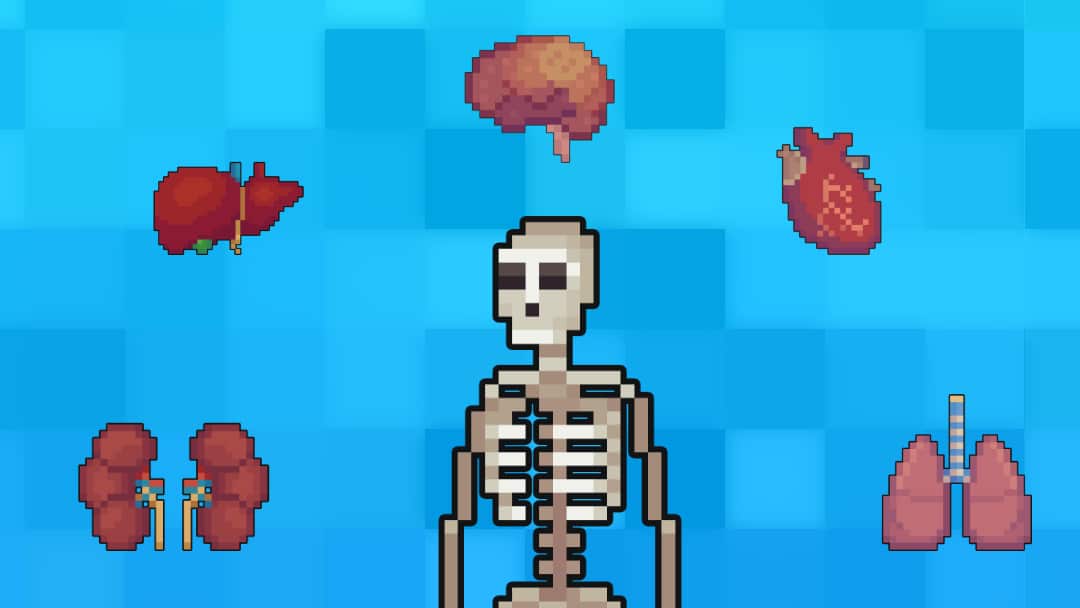 The location of body parts and associated pathology can be difficult to describe without specific anatomical terminology. The universal descriptions allow for a standardised reference point for referring to structures, which provides precision and reduces room for medical error or ambiguity.1,2

This article will cover the anatomical position and describe key anatomical terms.

The anatomical position is the starting point for any description of the human body.

The anatomical position is facing forwards, with mouth closed and facial expression neutral.1, 3 Eyes focused on the distance. Arms should be straight and by the sides with palms facing forward. The penis is erect. Legs are straight with feet flat on the ground and toes facing forwards.3

You may also be interested in our guides to anatomical movements of the human body and anatomical planes.

Directional terms refer to the relative locations of different body structures.2 Essentially, they explain how close or far away different structures are from one another.

Anterior and posterior are terms used to describe whether a structure is in front of or behind another. The more anterior a structure is, the closer it is to the front of the body.

Superior and inferior are terms used to describe how close structures are to the head or the feet in relation to one another. Structures which are more superior will be closer to the head (to remember that Superior means closer to the Head, think about how you use your Head to drink Soup).

In Figure six, the liver can be described as proximal to the stomach but distal to the anus.

As the human body is mostly symmetrical, it is important to differentiate between sides when describing separate structures.

In Figure 7, the pink arm is ipsilateral to the blue leg but contralateral to the red leg (ipSilateral structures are on the Same side).

Internal structures can be described based on how close they are to the skin’s surface.

Superficial structures are closer to the skin, whereas deep structures are further from the skin’s surface. These descriptions are best visualised in a sagittal plane rather than a frontal plane used for other terms.

Anatomical terms can also be combined to enable even more specificity in descriptions (e.g. anterolateral).

There are three commonly used anatomical planes: coronal (frontal), transverse, and sagittal. To describe normal or pathological structures imaged within these planes, it is important to utilise anatomical terminology correctly.

Although not a description of anatomical location, if a person is lying down, it is important to know whether they are supine or prone, as this can influence how different structures appear both in person and on imaging.

There are three main areas of clinical relevance for anatomical terminology.

When providing a patient handover, it is important to describe the exact location of any injuries, lesions, or abnormalities identified. This is particularly relevant when referring a patient over the phone, as you cannot use imaging or reference using your own body.

This allows the receiving clinician to get a precise picture of the location of pathology, as well as identify if any changes occur or new abnormalities develop.

When dealing with injuries (whether internal or external), it is important to describe and document exactly where the injury is. This helps others caring for the patient to monitor progress. It can also help surgical teams pinpoint the exact site of any intervention required.

When reviewing imaging, it is important to be able to identify and describe anatomical structures within the image, as well as any potential pathology. When asked to request imaging, it is essential to understand the anatomical terms used to describe the requested area.

When describing a specific area of the body, it is important to order the terms used correctly. Starting with the term applying to the largest region on the body and gradually becoming more specific.