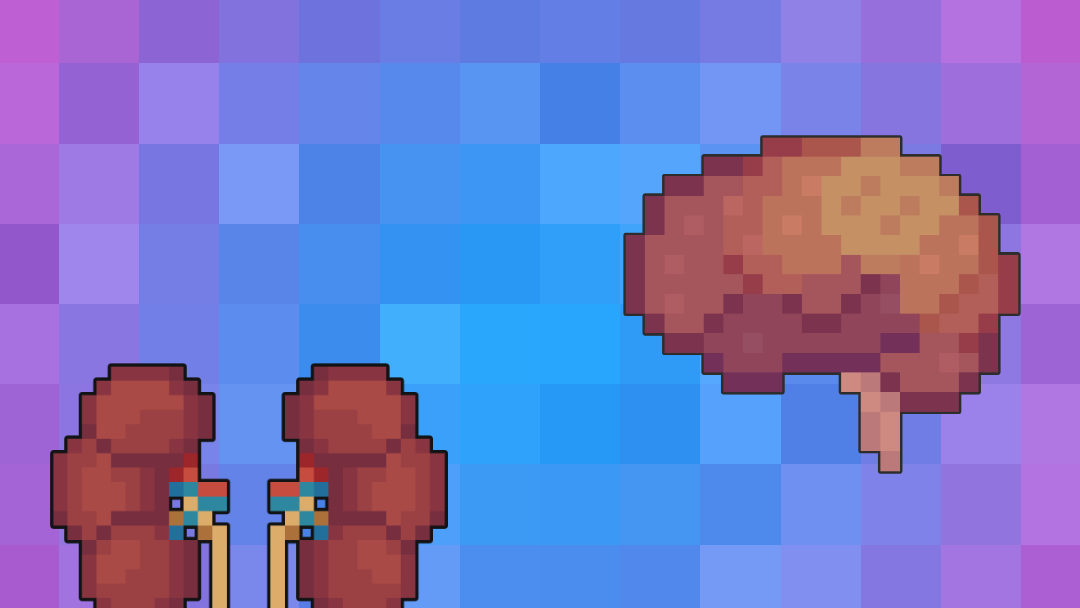 What is diabetes insipidus?

Diabetes insipidus (DI) is a disease characterised by the passage of large volumes (>3L/24hrs) of dilute urine (osmolality <300 mOsmol/Kg).¹

In some cases, the volume of urine produced can be as much as 20 litres in a 24 hour period and therefore rapid dehydration can easily occur, leading to death if not managed appropriately.

1. Vasopressin (antidiuretic hormone/ADH) is produced by the hypothalamus in response to increased serum osmolality.

2. Vasopressin is then transported to the posterior pituitary gland, where it is released into the blood.

3. Vasopressin then travels to the kidneys where it binds to vasopressin receptors on the distal convoluted tubules.

4. This binding causes aquaporin-2 channels to move from the cytoplasm into the apical membrane of the tubules:

5. The extra water that has been reabsorbed re-enters the circulatory system, reducing serum osmolality.

6. This reduction in serum osmolality is detected by the hypothalamus as negative feedback, resulting in decreased production of vasopressin.

Neurogenic diabetes insipidus occurs as a result of decreased circulating levels of vasopressin (ADH). Vasopressin is responsible for promoting the kidneys to retain fluid, therefore, decreased circulating levels of ADH results in the production of increased volumes of urine. Vasopressin is produced by the hypothalamus and released by the posterior pituitary gland, meaning damage to either of these structures can cause diabetes insipidus.

Causes of neurogenic diabetes insipidus include:

The kidneys are responsible for reabsorbing fluid when ADH binds to their receptors. Anything which interferes with this binding or damages the kidneys has the potential to cause diabetes insipidus.

Causes of nephrogenic diabetes insipidus include:

Dipsogenic diabetes insipidus occurs as a result of hypothalamic disease or trauma. The hypothalamus is responsible for controlling the thirst mechanism which is a key component of maintaining normovolaemia. In dipsogenic diabetes, the thirst mechanism damaged, resulting in the affected patient being excessively thirsty regardless of their fluid status. The patient, therefore, consumes large volumes of fluid, which suppresses the secretion of ADH and increases urine output.

Typical symptoms of diabetes insipidus include:

24-hour urine collection should be performed to measure the amount of urine produced.

Diabetes insipidus typically involves the production of more than 3 litres of urine in a 24-hour period.

The patient is deprived of fluids for up to eight hours or 5% loss of body weight, following which desmopressin is given (see the table below for the interpretation of results).

MRI imaging of the pituitary, hypothalamus and pineal gland is used to assess for cranial causes of diabetes insipidus (e.g. pituitary tumour).

Renal tract ultrasound or intravenous pyelogram is used to assess for evidence of post-obstructive uropathy.

The fluid deprivation test can provide an initial indication as to the likely cause of diabetes insipidus (e.g. neurogenic, nephrogenic).

The table below shows the likely underlying cause based on the results of the fluid deprivation test.1,2

If the diagnosis is neurogenic DI the urine osmolality will be low after fluid deprivation but normalise after desmopressin is given.

This is because neurogenic DI is caused by the lack of ADH production, therefore, giving a synthetic form of ADH such as desmopressin normalises levels of the hormone resulting in the normalisation of serum and urine osmolality.

If the diagnosis is nephrogenic DI then the urine osmolality will remain low throughout regardless of desmopressin. This is because the kidneys are unable to respond to either synthetic or endogenous ADH.

If the diagnosis is primary polydipsia the urine osmolality will remain high after fluid deprivation as well as after desmopressin is given. This is because the patient’s vasopressin axis is intact and otherwise completely normal.

If the diagnosis is that of partial DI or polydipsia the picture may be mixed and further investigations are required.

The primary issue in neurogenic DI is an endogenous deficiency of ADH. As a result, replacement with a synthetic form of ADH such as desmopressin is usually effective. Desmopressin can be given orally, intranasally or parenterally. Patients require ongoing monitoring due to the risks associated with desmopressin treatment (e.g. overdose results in hyponatraemia). Typically, patients require serum sodium osmolality measuring every 1 to 3 months.2

If daily urine volume is less than 4 litres/24hrs and the patient is not severely dehydrated, definitive therapy is not always necessary. Patients need access to drinking water and should be advised to drink enough to satisfy their thirst. Metabolic abnormalities should be corrected if present and any medications that could be causing the problem should also be stopped (e.g. lithium, demeclocycline). High dose desmopressin is sometimes used for mild-to-moderate cases of nephrogenic DI.2

The underlying psychiatric disorder needs to be treated.