Human Immunodeficiency Virus (HIV) is becoming increasingly common. Treatment options have advanced and prognosis is much better than in previous decades, however there is still a lot of stigma attached to a diagnosis. The key to good prognosis is early detection – this article is written to describe some key facts about the virus, discuss HIV testing and to display methods of treatment.

HIV is a retrovirus which depletes the number of t-helper (CD4) cells and gradually causes immunosuppression. There are several strains of the virus, but all have the same effect.

The general course of the disease is such:

Seroconversion is the period of time in which antibodies to HIV are produced and become detectable after infection with the virus. This generally takes 2-6 weeks, and is often associated with flu-like symptoms.

HIV-related illnesses include opportunistic infections which occur due to HIV-related immunosuppression (such as thrush) and co-infection with Hepatitis B or C.

Due to the varying rate of progression there can be a period of many years between infection and development of symptoms. HIV infection, untreated or advanced, becomes defined as AIDS (Acquired Immune Deficiency Syndrome) when the CD4 count falls below 200, or the patient develops one or more ‘AIDS-defining conditions’ in the setting of being infected with HIV. These are conditions which would not generally occur in patients with competent immune systems.

It is advised that HIV testing should be offered to:

If a pregnant woman is diagnosed with HIV, they may or may not require immediate treatment depending on their CD4 level. If CD4 low – start HAART (highly active anti-retroviral therapy) as soon as possible, if high CD4 count this depends on viral load.

If a patient attends with an episode of high risk sexual activity they should be considered and counselled for PEP.

This involves taking anti-retroviral therapy – 3 drugs, for 28 days, within 72hrs of high-risk event. The drugs given are anti-retrovirals, anti-diarrhoeals and anti-nausea medications.

This is not currently available on the NHS, but is important to be aware of. PrEP is a course of anti-retrovirals that are given to a HIV negative person before high risk sexual activity that minimises the risk of transmitting HIV.

There are many benefits to early diagnosis. We are moving towards a culture of more routine testing which is aiding this shift to early diagnoses. The main benefit is that prognosis is improved the earlier HAART is commenced. Treatment can be given before a patient is symptomatic which can prevent and delay HIV positive individuals from becoming unwell.

When diagnosed early, the life expectancy for a person who is HIV positive is better than that for someone with Type 2 diabetes.

Every diagnosis of HIV needs to be discussed with a sexual health specialist. They often will initiate and guide treatment, and follow the patient up too. For reference, however, we will now go through the modes of treatment and commencement of treatment. 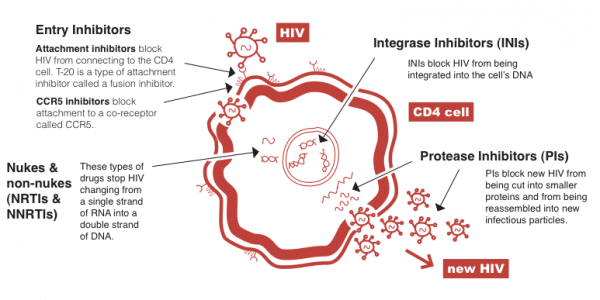 HAART generally consists of 2 NRTIs and one of either a protease inhibitor, NNRT or integrase inhibitor. There are now some single pill combinations.

When to begin treatment depends mostly on CD4 count and patient wishes. This should be done only with discussion from a sexual health specialist, and is likely to be commenced by them.

As a general rule:

To commence HAART the patient needs to be ready and committed to treatment, which involves a once-daily regimen initially. The side effects of HAART can be extensive and severe, especially to begin with. Side effects include nausea, vomiting, diarrhoea, hypersensitivity, anaemia, LFT abnormalities, pancreatitis, lactic acidosis and peripheral neuropathy. For treatment to be effective 95% of adherence is needed. If more doses are missed the effectiveness of the treatment drops and the chances of viral resistance and mutation rise.

The response to HAART is measured regularly by viral load and CD4 count. The lower the viral load, the less transmission risk there is.