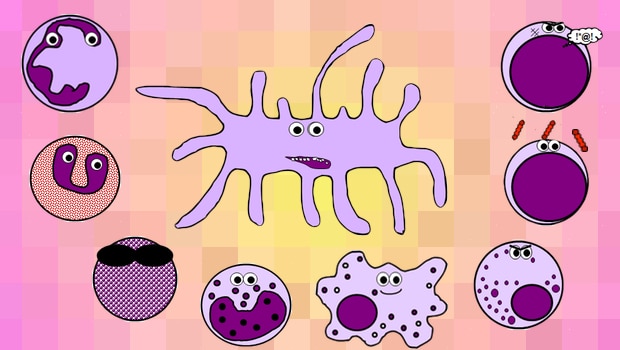 If you'd like to support us and get something great in return, check out our OSCE Checklist Booklet containing over 120 OSCE checklists in PDF format. You might also be interested in our Clinical Skills App and our OSCE Flashcard Collection which contains over 1800 cards.

Immunology seems to be one of those things that people either love or hate; I think it’s fascinating, but I know there will be a lot of people out there who approach the subject with a mixture of terror, frustration and loathing. To make the normal immune response less of a horrendous nightmare to learn, I made a summary diagram showing friendly, loveable cartoon immune cells doing what they do best – pwning pathogens. I know it looks pretty complicated, but don’t panic! I’m also going to explain everything step by step, so by the end of this article it will all make sense and you’ll feel super clever.

You can click on the diagram to enlarge it, and please feel free to download and print it too.

P.S. This article is a bit of a whopper, so while things are printing I would nip and get a cup of tea/coffee/your unhealthy revision fuel of choice to ensure you’re sufficiently energised before you start!

Anatomy of the immune system

The immune system is a mobile, circulating system. However, there are some fixed anatomical structures that are important to its function:

Barrier mechanisms of the immune system

There are numerous potential ways for pathogens to enter the body. Humans have therefore evolved several physical and chemical barrier mechanisms to prevent the invasion of infective organisms:

Cells of the immune system

There are many different groups of cells involved in the immune response. Depending on which medical school you’re at, you may be expected to be able to recognise them on microscopy, so I’ve included some pictures of actual real cells alongside my silly cartoon ones.

A family of white blood cells containing granules in their cytoplasm

The immune response in a nutshell

The normal immune response can be broken down into four main components:

Let’s start at the very beginning. An evil pathogen has penetrated the body’s barrier mechanisms and is plotting to start a nasty infection… 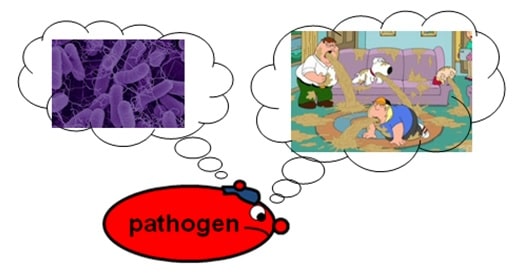 This is the first line of defence against any infection. It is very fast – it is established within about 4 hours – but is non-specific and has no memory, so it is not strong enough to effectively tackle an infection on its own. It consists of a cellular response by the innate immune system, a chemical response by cytokines and complement, and the subsequent initiation of an acute inflammatory response.

Phagocytes are a very important part of the innate immune system, as they act to fight the new infection and present antigens. Examples of “professional” phagocytes include dendritic cells, blood monocytes, tissue macrophages and, most importantly, neutrophils. Neutrophils are an absolutely key component of this initial process which only appear in response to infection or injury, and are therefore not found in healthy tissue. 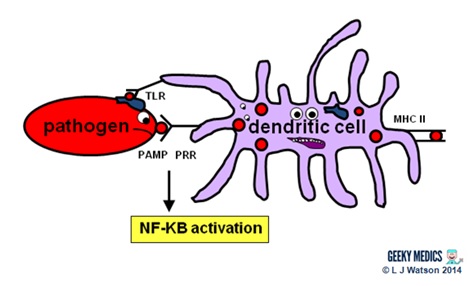 Natural killer cells, along with neutrophils and other phagocytes, also have an important role in the initial front-line defence against the infection. 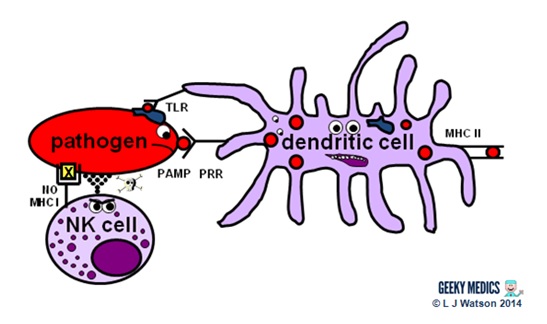 Complement is a cascade of chemicals similar to the clotting cascade.

There are three separate pathways that activate the complement system:

All three of these pathways act to generate the enzyme C3 convertase. This cleaves C3 into two parts (C3a and C3b) and activates the rest of the cascade. 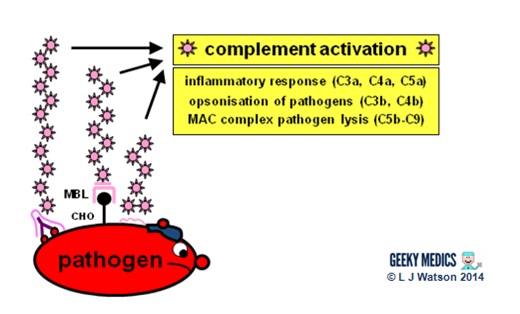 Proinflammatory cytokines are the second key component of the innate chemical immune response. They are small messenger proteins released by immune cells in response to evidence of infection, which interact to mediate the acute inflammatory response (see Part 2). There are a huge number of different cytokine molecules, including whole families of interleukins, tumour necrosis factors and chemokines.

Some important examples include:

The acute inflammatory response is kick-started by innate immune cells, proinflammatory cytokines and complement. It acts as a bridging mechanism to localise and contain the infection in the period from about 4-96 hours after its onset, when the innate immune system is running out of steam and the specific cellular immune response is still trying to get going.

The main features of this process are: 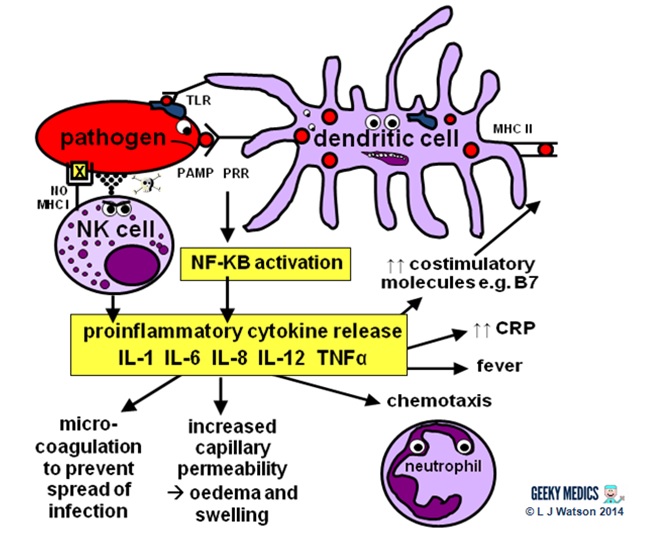 The innate immune system and inflammatory response can only hold off an infection for so long – ultimately, a specific immune response needs to be activated. This is done via antigen presentation to the adaptive immune system.

It is very important that the immune response is not activated inappropriately, as this could cause a lot of unnecessary damage. There are two main protective mechanisms which prevent this from happening by controlling the activation of the adaptive immune system: 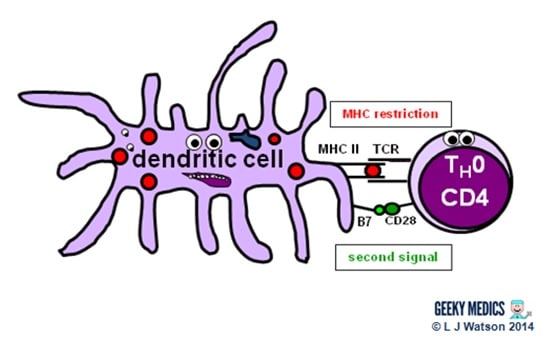 The combination of the right antigen, an MHC II and a B7 second signal gives the green light for naive T helper cells to get going. The next step is for them to differentiate into either TH1 cells, which promote cytotoxic T cells and cell-mediated immunity, or TH2 cells, which promote B cells and humoral immunity.

Humoral immunity is the term for a specific adaptive immune response activated by TH2 cells, which leads to the production of B cells and antibodies.

This immune response is designed to fight extracellular infections, including most bacteria and fungi, protozoans such as Giardia, and parasitic worms such as Schistosoma.

Antibody molecules are essentially secreted B cell receptors which provide an antigen-specific action. They are Y-shaped molecules with a complex structure comprising:

There are five antibody classes or “isotypes”. These are dictated by the structure of the heavy chain constant region.

There are a potentially infinite number of antigens the immune system might encounter, so it is vital that the immune response is able to adapt to this and reflect a similar degree of diversity. Humans need to be able to generate about 10 billion different antibodies, but it would be impossible to code every possible antibody into the human genome and still be able to fit our DNA into such tiny spaces within cells. As a result, a range of mechanisms have evolved to allow B cells to manipulate their own DNA and produce billions of different variable region structures:

Antibodies fight extracellular infections in a number of ways: 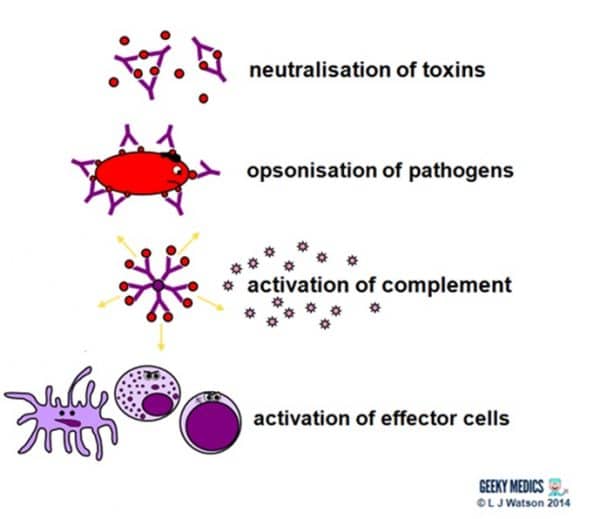 Activated B cells mature into plasma cells and start to make antibodies:

Once the infection has been cleared, some plasma cells will remain as dormant “memory” B cells: 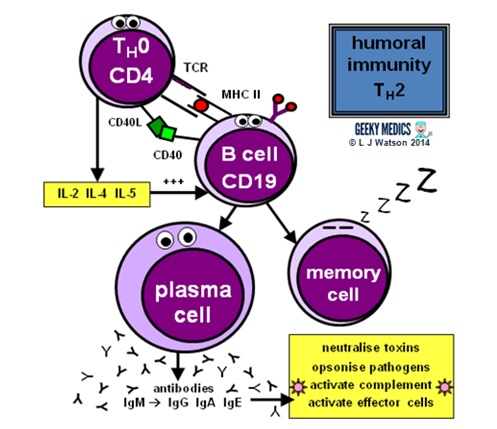 Cell-mediated immunity is the term for a specific adaptive immune response activated by TH1 cells, which leads to activation of antigen-presenting cells and a cytotoxic T cell response.

This immune response is designed to fight intracellular infections, including viruses, some bacteria and fungi, and protozoans such as Plasmodium and Toxoplasma.

T cell receptor diversity is just as important as antibody diversity, as both systems need to be able to cover any possible infectious antigen. T cells generate this genetic diversity in essentially the same way as B cells do during their development in the bone marrow, using VDJ recombination by RAG proteins, junctional diversity and the addition of N regions, but they do not undergo class switching or somatic hypermutation during their maturation.

All immature T cells undergo a rigorous “education” in the thymus gland before they are released into the bloodstream, but this process is particularly important for cytotoxic T cells due to their destructive nature. They are “tested” with a variety of self cell antigens, and any cells which have generated a receptor that reacts to these undergo negative selection and are destroyed. This essential mechanism prevents the immune system from reacting to the body and is known as immunological tolerance or self-tolerance. In order to graduate successfully from the thymus, T cells must also express CD3 and CD4 or CD8 (but never both), and bind to self MHC complexes (but not too strongly). Only about 1% of T cells generated in the bone marrow actually make it through this process alive!

The first step of the cell-mediated immune response is the activation of antigen-presenting cells: 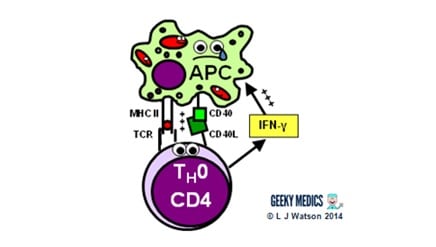 The next step is the activation of an  antigen-specific cytotoxic T cell response:

Once activated, the cytotoxic T cells are very keen to get out and start hunting and killing things. They identify infected cells by recognising the antigen displayed within MHC I on their surfaces. They then destroy these cells using one of several mechanisms: 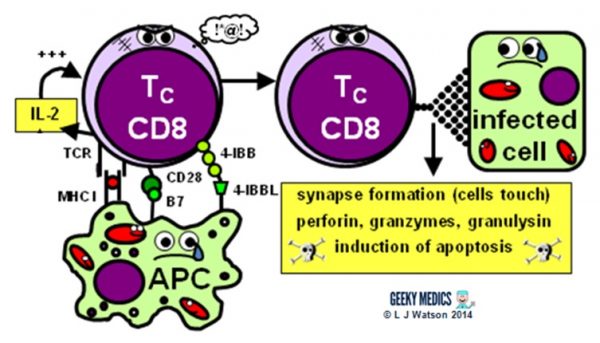 After the infection has been dealt with, the most antigen-specific cytotoxic T cells will remain behind as dormant memory T cells. The principles of T cell memory are essentially the same as B cell memory. 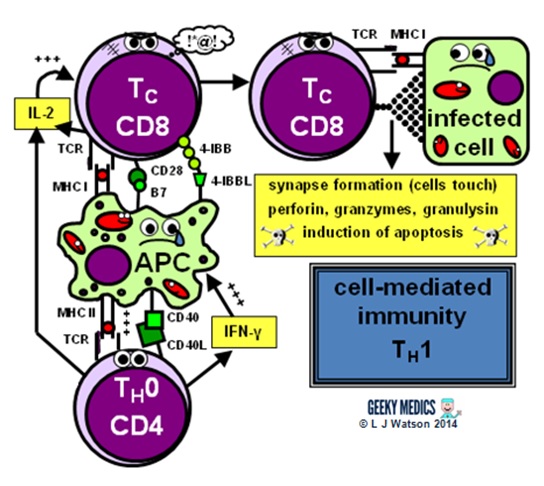 Summary of the immune response

We’ve now covered everything in the diagram in detail – hopefully it seems a lot less scary now! 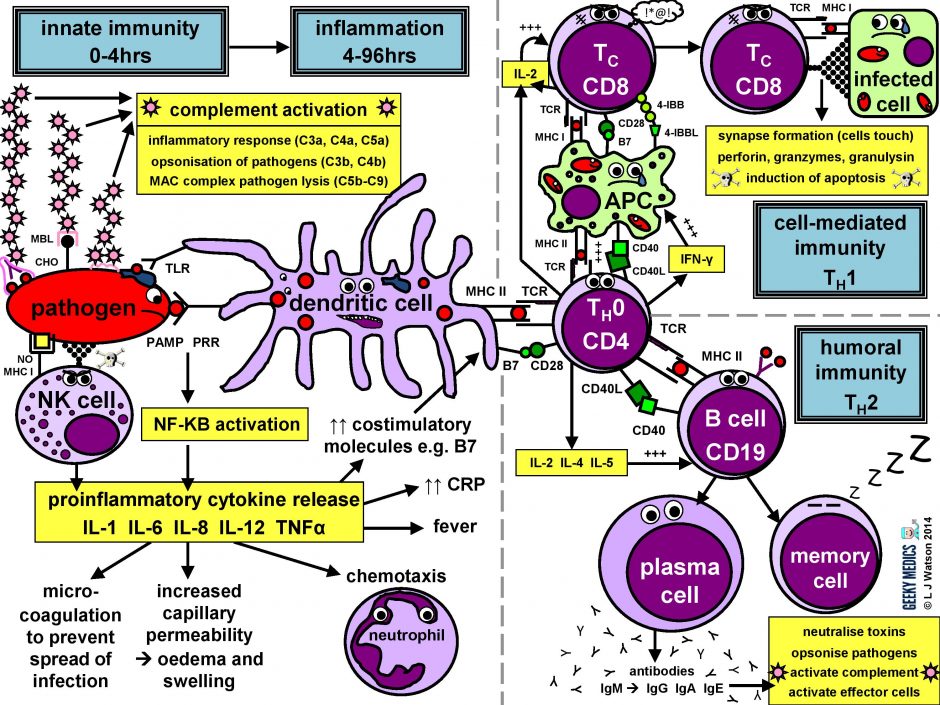 It is useful to be able to apply your knowledge of the immune response to different types of infection, especially when it crops up in exam questions. The most important differentiation to make is whether the infection is intracellular or extracellular, as this generally dictates which branch of the adaptive immune response will be activated:

Some types of pathogens can only exist as either extracellular or intracellular organisms, whilst other types can vary depending on the individual species. There are also unique variations in aspects of the immune response for some organisms.

I hope you found this guide helpful and fun. I certainly enjoyed creating the little immune cells and telling their story (perhaps a bit too much actually). It was a mammoth undertaking to write this thing, and while I have tried to be as thorough and accurate as possible if any of you clever folks out there have noticed any mistakes/miscommunications/other cock-ups please do let me know so I can correct them for the benefit of everyone else. In return, you shall receive the reward of your name immortalised below and a Geeky Medics gold star… 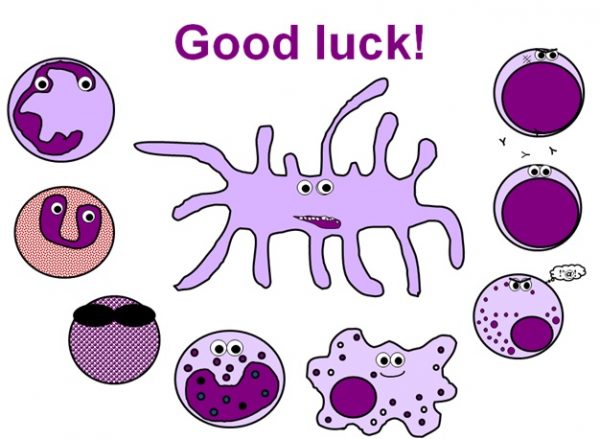 A Career as a Clinical Psychologist with Dr Siwan Roberts