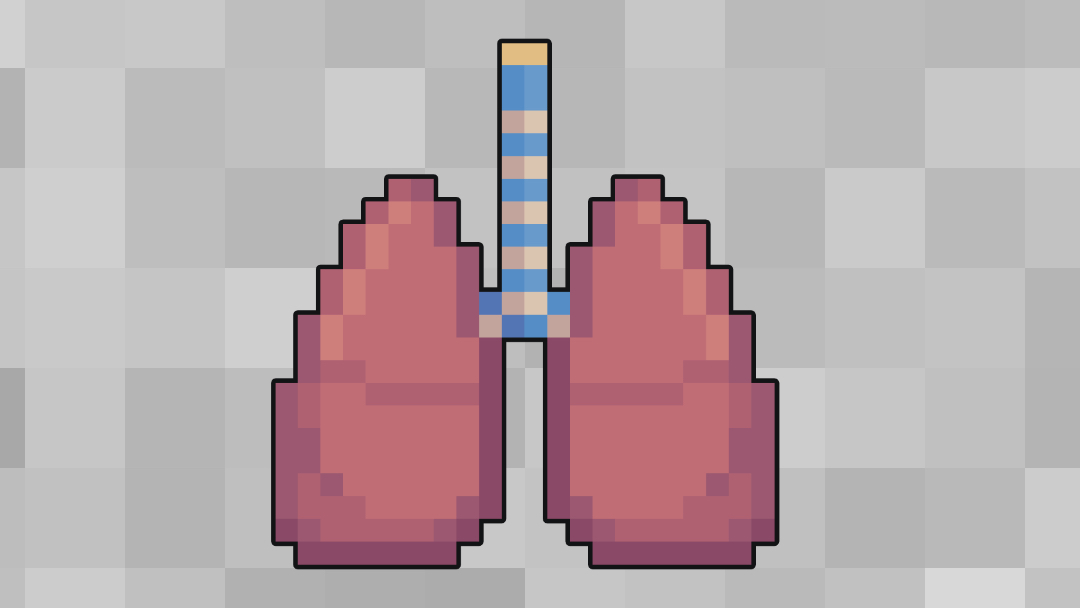 This article provides an overview of the mechanics of breathing, including the stages of ventilation, relevant anatomy and associated pathology.

Breathing is the process by which oxygen and CO2 are transported to and from the lungs (also known as ventilation).

In order to understand the mechanics of breathing it is important to be aware of the physics and anatomy that underpin this process.

Boyle’s law helps us to understand the mechanics of breathing.

At constant temperature, the volume of a gas is inversely proportional to pressure.

As the volume of a container of a gas decreases, the pressure increases. This is demonstrated by the image below (Figure 1).

The key anatomical structures involved in ventilation include:

Inspiration is the process of transporting air into the lungs.

These actions significantly increase the volume of the thoracic cavity. This increase in intra-thoracic volume causes a reduction in intra-alveolar pressure, which in turn allows air to move into the lungs along a negative pressure gradient.

Expiration is the process of transporting air out of the lungs.

These actions significantly decrease the volume of the thoracic cavity. This decrease in intra-thoracic volume causes an increase in intra-alveolar pressure, forcing air to move out of the lungs and into the atmosphere along a negative pressure gradient.

The accessory muscles recruited during active respiration include:

Why do some surgical patients who are presenting with bowel obstruction (Figure 4) find it difficult to breathe? Let’s go back to our principles and apply Boyle’s law.

Remember pressure is inversely related to volume. In this case, large bowel obstruction prevents the diaphragm from being able to flatten effectively, reducing intrathoracic volume generated via inspiration and, in turn, reducing the volume of gas that can be inspired. As a result, patients can feel short of breath due to their inability to inspire effectively. Decompression of the bowel via a nasogastric tube can significantly improve the mechanics of breathing in this situation.

Degenerative neuromuscular diseases such as motor neurone disease can result in inadequate ventilation, due to weakness of the respiratory muscles such as the intercostal muscles and diaphragm.

Weakness of these muscles: