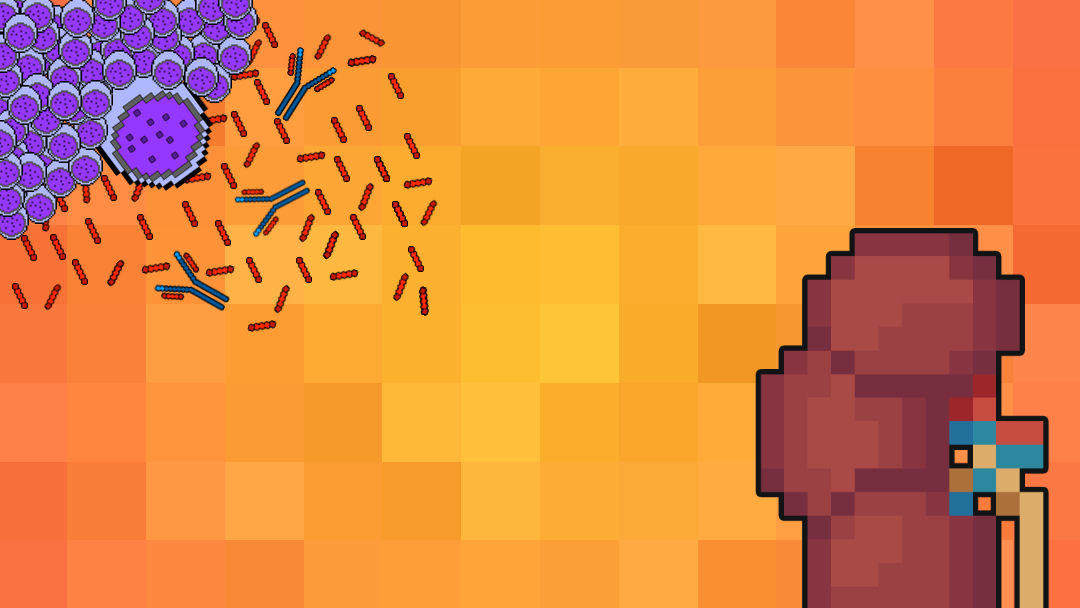 What is multiple myeloma?

These plasma cell clones accumulate in the bone marrow, crowding out the normal healthy tissue responsible for producing normal blood cells. As a result, the production of normal levels of healthy blood cells is prevented, which results in issues such as anaemia, impaired immune function and low platelets.

In addition to crowding out the bone marrow and interfering with normal blood cell production, the abnormal plasma cells produce a paraprotein. These paraproteins are abnormal immunoglobulin light chains, which can cause damage to the kidneys by forming protein casts in the renal tubules. The abnormal plasma cells also secrete factors which activate osteoclasts to break down bone, resulting in widespread lytic lesions, bone pain and hypercalcaemia.

Myeloma is classified based on which type of immunoglobulin is produced:¹

CRAB is a useful mnemonic to help remember the most common features of myeloma: ¹

The International Myeloma Working Group developed criteria for the diagnosis of myeloma. ¹

The criteria separate out 3 distinct diagnoses, within the myeloma spectrum of disease:

The below criteria must be met for a diagnosis of symptomatic myeloma:

Active treatment is considered for most patients able to tolerate it.

The below criteria must be met for a diagnosis of asymptomatic (smouldering) myeloma:

To confirm the diagnosis of MGUS, all of the below criteria must be met:

The overall goal of management in multiple myeloma is to reduce the disease-causing plasma cell population, therefore reducing symptoms and signs of disease.

For patients >65 with significant concurrent illness