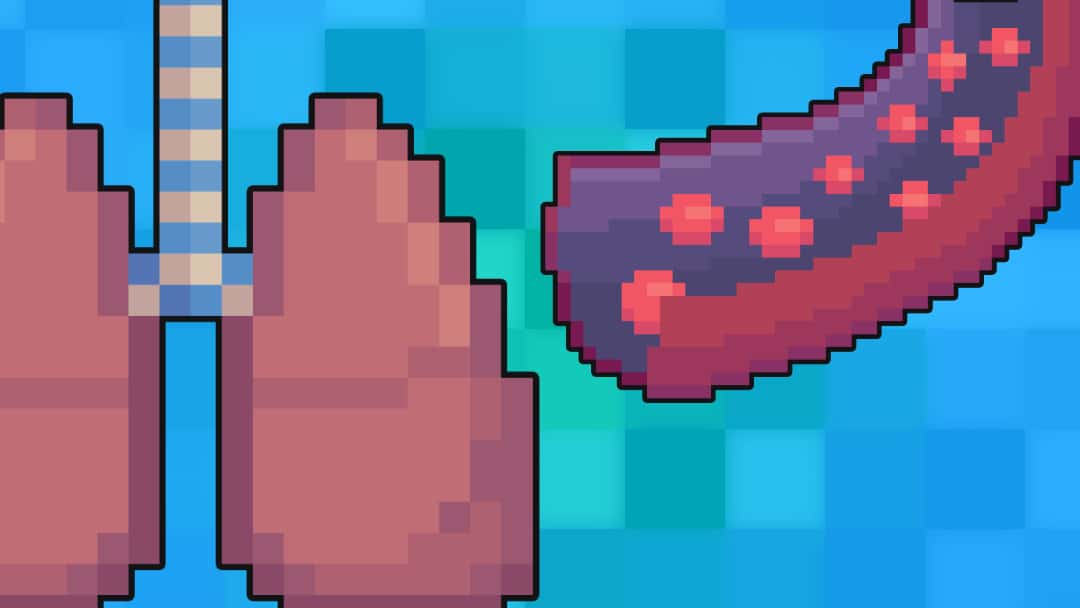 Oxygen Transport in the Blood

Oxygen (O2) is an essential molecule in the human body. It is the final electron acceptor in the electron transport chain, located in the mitochondria, and so has a key role in the production of aerobic energy – i.e. adenosine triphosphate (ATP). A constant supply is therefore required to tissues around the body, and this is achieved by the carriage of oxygen in the bloodstream.

Oxygen enters the bloodstream via the lungs, where it diffuses across the alveolar epithelium and pulmonary capillary endothelium to reach the pulmonary circulation.

Once the oxygen has entered the pulmonary circulation, it is carried in the blood to target tissues in two distinct forms:

Two measurements commonly used in clinical practice to investigate how oxygen is being carried in the blood are the partial pressure of oxygen (PO2) and the oxygen saturation (SO2). The partial pressure of oxygen reflects the amount of oxygen dissolved directly in the plasma, while the oxygen saturation reflects the proportion of haemoglobin that has oxygen bound to it.

Haemoglobin is a tetramer, meaning it is made up of four subunits. Each subunit is formed of a globin polypeptide chain and an associated haem group (a porphyrin ring with a central iron atom). Each iron atom, and therefore each subunit, can reversibly associate with a single oxygen molecule.

When an oxygen molecule binds to a haem group, a conformational change occurs in the related globin chain structure. As the globin chains are closely linked, a change in the shape of one subunit is also transmitted to the other subunits. Oxygen binding to one haemoglobin subunit acts to increase the remaining subunits’ affinity for oxygen. Deoxygenated haemoglobin exists in a ‘tense’ (T) conformation, with a low affinity for oxygen. As oxygen begins to bind to haem groups, the haemoglobin moves into a ‘relaxed’ (R) state, allowing further oxygen molecules to bind more easily. This process is referred to as co-operativity.2

This co-operativity between the subunits results in the characteristic sigmoidal oxygen-haemoglobin dissociation curve shown in Figure 2.

Some important factors which affect haemoglobin-oxygen affinity are discussed below.

Low pH, a feature of tissues with high metabolic activity, reduces the affinity of haemoglobin for oxygen, shifting the curve to the right. The reduced affinity means that more oxygen is offloaded in metabolically active tissues, where the oxygen requirement is highest. The reduction of haemoglobin-oxygen affinity at low pH is known as the Bohr effect.

Increased temperature reduces haemoglobin’s affinity for oxygen, shifting the curve to the right. This has an important effect during exercise when active muscle rises in temperature and therefore triggers increased oxygen offloading.

2,3- diphosphoglycerate is an intermediate product of glycolysis, found in red blood cells. 2,3-DPG reduces the affinity of haemoglobin for oxygen, shifting the curve to the right. Increased 2,3-DPG is found in anaemia and at altitude, which is important in the prevention of tissue hypoxia.2

Carbon monoxide is a colourless, odourless gas which can be released from faulty boilers or exhaust fumes as well as being present in polluted air and cigarette smoke. Its pathological effects result from its ability to impair haemoglobin oxygen carriage. Carbon monoxide binds to the haem groups of haemoglobin to form carboxyhaemoglobin, but with a roughly 210 times higher affinity than oxygen does. The increased affinity that carbon monoxide has for haemoglobin means that even low concentrations can displace oxygen from its binding sites and markedly reduce oxygen delivery to tissues. Carbon monoxide binding also shifts the oxygen haemoglobin dissociation curve to the left, reducing the ability of any bound oxygen to dissociate in the tissues and leading to tissue hypoxia.

Carbon monoxide poisoning can cause a range of symptoms, depending on concentration and length of exposure (and therefore the carboxyhaemoglobin concentration). Mild symptoms include headaches, nausea and vomiting and lethargy but high concentrations or acute toxicity can result in seizures, coma or even death. 3