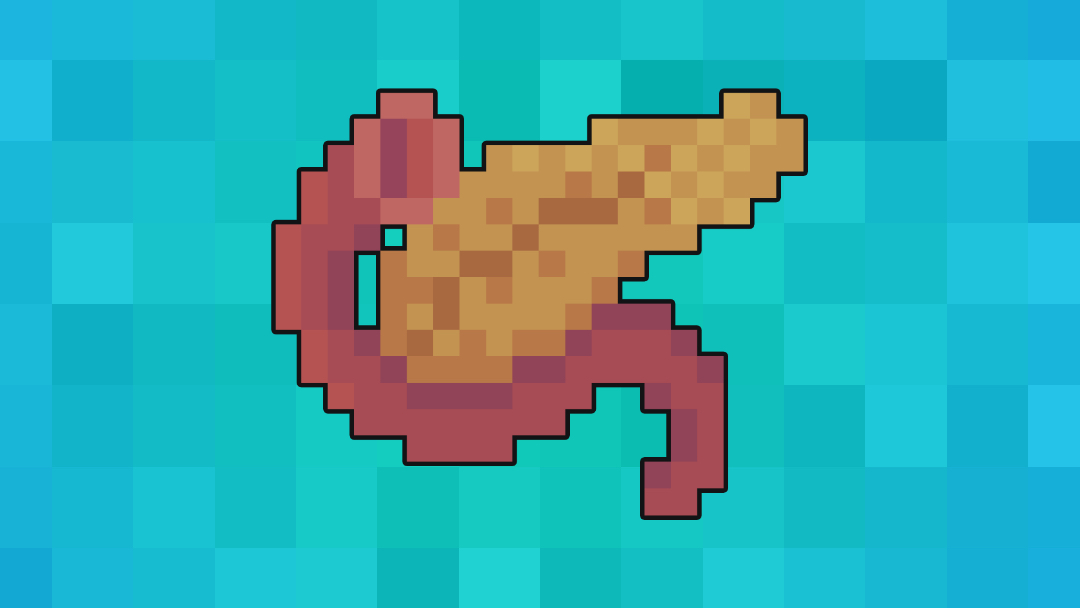 Pancreatic cancer is a common and deadly disease; one of those nightmare cancers that tend to progress insidiously and unrecognisably until finally detected at a late and incurable stage. Despite massive advances in surgical and medical management over the last few decades, it continues to have a terrible prognosis and many patients die within months of diagnosis. It is vital for doctors at all stages of training to have an awareness of the symptoms and appropriate initial investigations in order to have the best chance of identifying pancreatic cancer early, when surgeons might still be able to remove it. The majority of pancreatic cancers are ductal adenocarcinomas, so this article will focus mainly on these.

Anatomy and physiology of the pancreas

The anatomical location of a pancreatic tumour is important in dictating its likely presenting symptoms.

95% EXOCRINE TUMOURS – these are derived from the ductal epithelium, acinar cells, connective tissues and lymphatics; they are by far the most common type and may be solid or cystic:

5% ENDOCRINE TUMOURS – these are derived from the cells of the islets of Langerhans and the neuroendocrine system; they are rare but affect up to 75% of patients with MEN1 syndrome

Painless obstructive jaundice is due to cancer until proven otherwise

Obstructive (or post-hepatic) jaundice can usually be distinguished from pre-hepatic or hepatic causes of jaundice by taking a history and doing some simple tests. The patient will have dark urine and pale stools, and may also have very itchy skin due to the deposition of bile salts. Alongside a raised conjugated bilirubin level, LFTs will show a cholestatic picture with an increase predominantly in ALP and GGT, with a less markedly raised ALT and AST. Cholesterol levels are also often raised.

Diagnostic tests for patients with suspected pancreatic cancer include:

Staging investigations for patients with a confirmed pancreatic cancer include:

Once all the required investigations have been performed, patients with pancreatic cancer should be referred to a specialist HPB cancer MDT where their case will be discussed on an individual basis by a team of surgeons, oncologists, radiologists and pathologists who make recommendations about the most appropriate course of treatment.

The grading system for pancreatic cancer is based on several measures of the degree of differentiation within the tumour cells:

Studies have shown that the grade of a pancreatic cancer is a useful prognostic indicator, in that patients with high-grade tumours tend to do much worse than their low-grade counterparts.

Pancreatic cancer is staged using the tumour nodes metastasis (TNM) system. Accurate staging is pivotal in informing prognosis and deciding the possible treatment strategies for pancreatic cancer, particularly in terms of whether a tumour is surgically resectable or not. Sadly, almost half of cancers are stage IV at diagnosis. The TNM criteria and their associated numerical staging stratification are shown in the tables below: 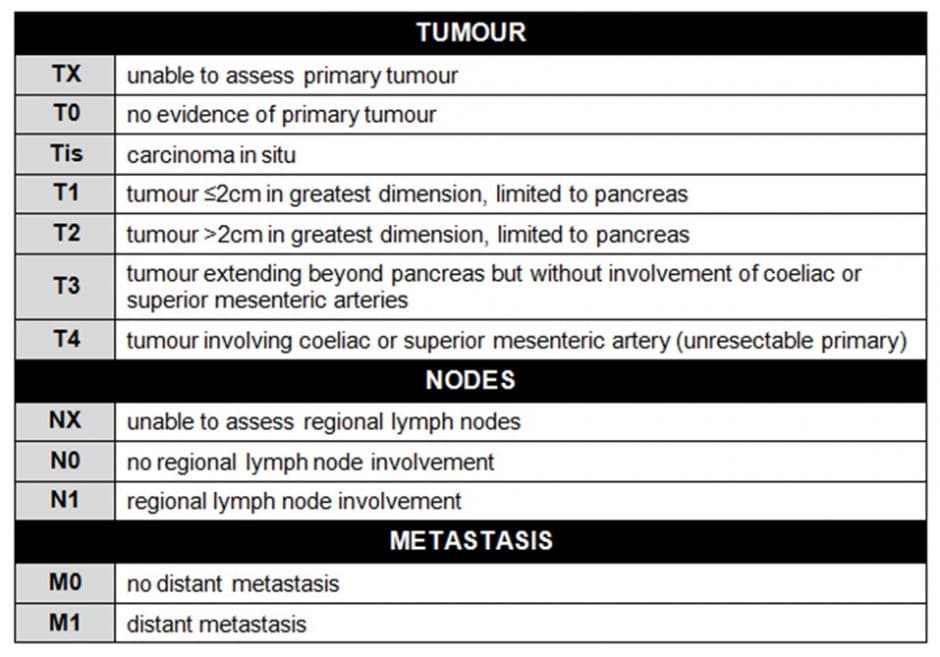 Surgery is the only possible cure for pancreatic cancer, and watchful waiting is pretty much never an appropriate option. The management strategy is therefore primarily dictated by whether a tumour is resectable or not, but other important factors include the patient’s overall health and their fitness for major surgery and post-operative chemotherapy. There are surgical treatments available to both cure resectable cancers and palliate unresectable disease, and these are supported by the use of adjuvant medical therapies such as chemoradiotherapy and pain control measures.

About 15-20% of ductal adenocarcinomas and 50-75% of other pancreatic cancers are suitable for active surgical treatment to remove the tumour. Surgical procedures to the pancreas carry very high risks, therefore it is vital that the patient is fit enough for the operation and that there is no evidence of metastasis on staging investigations or at the time of surgery in order to maximise the chances of long-term success. There are several surgical options available for pancreatic cancer, and the procedure performed depends on the location of the tumour.

Patients with localised tumours in the head of the pancreas or periampullary region are suitable for pylorus-preserving pancreaticoduodenectomy, more famously known as the modified Whipple procedure. This is officially one of the most complex, difficult and daring operations known to surgical practice. It involves removal of the head of the pancreas, most of the duodenum, the common bile duct and the gallbladder, with or without extended dissection of additional lymph nodes. The traditional Whipple’s procedure also includes removal of the pylorus and antrum of the stomach, which is still occasionally necessary depending on the extent of the tumour. If the portal or superior mesenteric veins are involved, they can also sometimes be resected and reconstructed using vein grafts. Once all the above organs have been resected, the functional anatomy of the upper GI tract needs to be restored so the patient can still digest and absorb things. This is done by creating a Roux-en-Y loop from a segment of jejunum, and using end-to-side anastamoses to make:

This is normally done via a large abdominal “rooftop” incision, but some centres are starting to do it laparoscopically now. The Whipple is a high-risk procedure requiring careful pre-operative work-up and intensive post-operative monitoring and management. If performed at a specialist centre, the overall operative mortality rate is <5%.

Complications include bleeding, sepsis, bile and pancreatic leakage, anastamotic failure, delayed gastric emptying, nutritional problems and patients often end up in hospital for weeks or months while they recover. Patients require long-term pancreatic enzyme replacement in the form of Creon tablets taken with food. Five-year survival for patients with ductal carcinomas is 10-20% (the figures are low due to the fact that some surgeons use the Whipple as a palliative procedure too), and for patients with other types of pancreatic cancer is 40%.

For the super-keen amongst you, here is a nice video from tzanox MD on YouTube showing the key steps in a modified Whipple procedure. It’s a bit long, but I think they’ve done a great job condensing what was probably a 5-hour operation into 20 minutes. As you can see, it’s hardcore surgery involving a lot of messing about near massive scary blood vessels, and the anatomy is a lot more difficult to figure out in real life than it is on diagrams!

Patients with localised tumours in the body or tail of the pancreas are suitable for a distal pancreatectomy. This involves removal of the body and tail of the pancreas as well as the spleen. This is technically a much more straightforward procedure than the Whipple and can be done openly or laparoscopically. Overall operative mortality is ~3%.

Complications are less frequent (as fewer organs have been chopped up and joined back together) but include bleeding, sepsis, pancreatic leakage and pancreatic endocrine insufficiency resulting in diabetes. Also, as they have had a splenectomy, these patients are at lifelong risk of potentially fatal overwhelming post-splenectomy infections (OPSI), usually due to encapsulated bacteria such as Streptococcus pneumoniae, Haemophilus influenza and Neisseria meningitidis. They, therefore, require pneumococcal, meningococcal and flu vaccinations as well as lifelong prophylactic antibiotics such as phenoxymethylpenicillin or erythromycin. Lots of patients wear alert bracelets to make medical staff aware they don’t have a spleen. If you ever see a patient who’s had a splenectomy, be vigilant for signs of sepsis, as it can progress very rapidly and can affect any asplenic patient regardless of their age, fitness or the time since their surgery.

Rarely, patients with localised tumours in or involving the neck of the pancreas, or diffuse cancers such as IPMN, may be offered a total pancreatectomy. This combines both of the procedures described above and is clearly a major undertaking, which is reflected in its operative mortality of 8-10%. Complication rates are similar to a Whipple procedure but with the added bonus of the risk of post-splenectomy sepsis and guaranteed lifelong insulin-dependent diabetes, which can be very brittle and difficult to manage.

Pain is a significant problem in patients with pancreatic cancer. This is generally managed with opiate analgesia, neuropathic adjuncts and management of obstructive symptoms as described above, but this is not always enough. Advanced pain control measures include alcohol ablation of coeliac plexus nerves, which can be performed transthoracically, transabdominally or transgastrically under EUS guidance.

Newer minimally invasive treatments for inoperable pancreatic cancer include irreversible electroporation (IRE), also known as NanoKnife. This is an innovative non-thermal cell destruction technique which uses the direct application of short bursts of high-voltage electric current to destroy cancer cells. Because it does not generate high temperatures, it minimises damage to surrounding tissues such as blood vessels and bile ducts. It has been shown in American trials to be an effective treatment with the potential to double survival, but can cause lethal cardiac arrhythmias if the electric current is not properly synchronised with the patient’s cardiac cycle. It is currently only approved by NICE for use in clinical trials, but may be used to treat a variety of cancers in the future.

Medical therapies for exocrine cancers may be used as adjuncts to surgery, or as a primary palliative treatment in advanced disease:

Unresectable or metastatic functional endocrine tumours (apart from somatostatinomas) can be managed medically with somatostatin analogues such as octreotide and lanreotide – these act to control symptoms by suppressing pancreatic hormone secretion.

There are a number of public health interventions in place which aim to reduce the incidence of pancreatic cancer, as well as a range of other lifestyle-related illnesses. Examples would include education and awareness campaigns which encourage smoking cessation, a healthy alcohol intake and the reduction of lifestyle risk factors such as obesity and poor diet.

It is clear that the development of a population screening programme to catch pancreatic cancer at an early treatable stage would be extremely valuable, as it is a disease that characteristically presents at a late and untreatable stage. Unfortunately, at the moment there is no available test that is sufficiently accurate, safe and straightforward to justify screening the population as a whole. CA19-9 is simply not sensitive or specific enough. A study called the EUROPAC trial is currently underway to test a screening programme for high-risk patients with a significant family history, such as those with hereditary pancreatitis, familial pancreatic cancer or cancer syndromes such as BRCA2. The screening protocols being tested involve either a CT scan or EUS every 3 years from the age of 40.