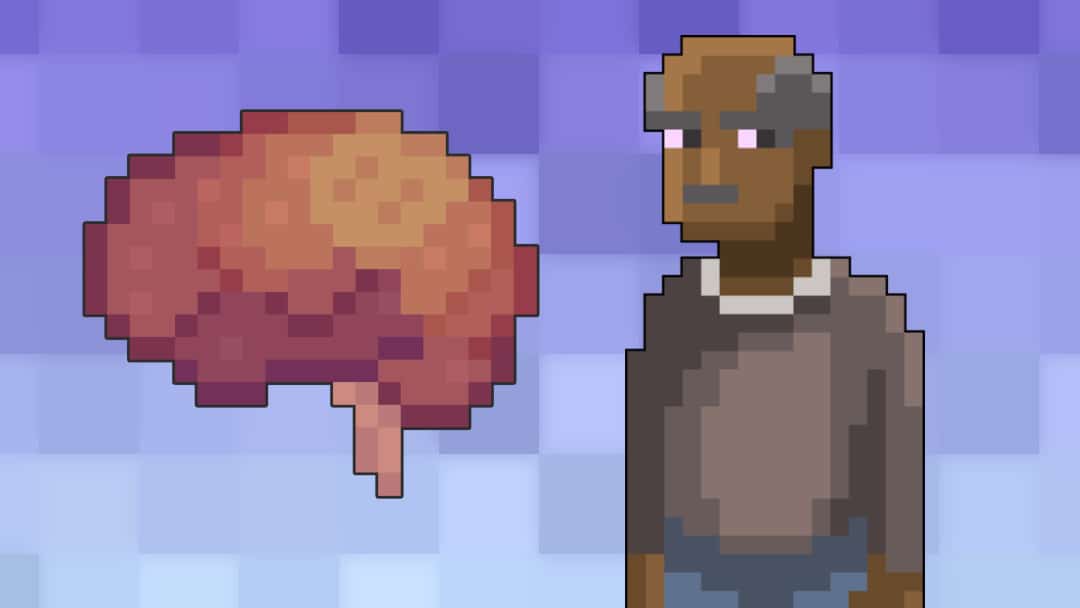 Parkinson’s disease (PD) is a neurodegenerative disorder occurring due to the loss of dopaminergic cells from the substantia nigra area of the brain.

Cardinal symptoms of PD are those of movement disorder, although non-motor symptoms such as cognitive impairment are also widely prevalent and account for a significant symptomatic burden. It is the second most common neurodegenerative disorder.1

Parkinson’s disease is the most common cause of parkinsonism, a syndrome of motor symptoms that involves bradykinesia plus at least one of; rigidity, tremor or postural instability.2

PD typically presents in those above 55 years old. It has a prevalence of 1-2% in people over 65 and this rises with age.3 There is a higher prevalence of PD in men, with a male to female ratio of 1.5:1.1

Dopamine is a key neurotransmitter used in the regulation of movement. It is produced in the substantia nigra within the basal ganglia which is the key movement control centre of the brain (Figure 1).

Physiologically, dopamine (an excitatory neurotransmitter) acts to upregulate the thalamus and ultimately the motor cortex via the direct pathway of the basal ganglia. This results in increased movement.

Loss of these dopaminergic neurons results in a reduction in the action of the direct pathway of the basal ganglia and a resultant increase in the antagonistic indirect pathway, which has a restrictive action on movement. Bradykinesia and rigidity are therefore key features of parkinsonism.

In PD, there is also formation of protein clumps (Lewy bodies) within the remaining neurons. These typically begin to form in the lower structures of the brainstem and progressively spread cranially towards the cortex. This progression can be broken down into Braak stages, however, this is a post-mortem staging progress and is not used clinically.

PD is an idiopathic disease. It is not known what causes the loss of dopaminergic cells, although there appears to be some genetic associations, with a first-degree family history cited in up to 20% of cases.3

Male sex and increasing age are known risk factors for PD. Research is ongoing into environmental factors and triggers of PD. Smoking is thought to be protective.

Parkinson’s disease is usually a clinical diagnosis, based on history and examination findings. The disease may remain sub-clinical for a prolonged period, with many features not clinically apparent until at least 50% of dopaminergic cells have been lost.3

Typical symptoms of Parkinson’s disease include:

Other symptoms which may be reported by family or carers include:

Motor features usually begin unilaterally but will progress to become bilateral. The side affected first continues to be worse causing persistent asymmetry.

Other clinical findings on general examination may include:

Other causes of parkinsonism include:3,5

Any drug which acts by blocking dopamine or increasing its breakdown can cause parkinsonism.

Symptoms are more likely to be bilateral in drug-induced parkinsonism than in PD. Culprit drugs should be reduced, replaced or stopped if clinically safe to do so to reduce parkinsonian symptoms.

The tremor in PD is typically noted in the hands, however, essential tremor is often present in the head, neck and trunk as well as the hands.

Essential tremor increases on action and improves at rest, the opposite of PD. It also improves with alcohol or beta-blockers but may be worse after caffeine or in times of heightened stress.3

There is no routine testing for biochemical markers of Parkinson’s disease.

In the case of cognitive impairment, a ‘confusion screen’ set of tests should be considered, to exclude reversible causes of confusion/delirium.

Relevant laboratory investigations as part of a confusion screen include:

Dopamine active transporter (DaT) scans can be used. These scans measure dopamine uptake in the basal ganglia and are therefore specific for primary Parkinsonian syndromes (i.e. not drug-induced parkinsonism or essential tremor).

Unfortunately, they are very costly and therefore reserved only for cases of diagnostic uncertainty.

Post-mortem findings include a reduction in the volume of the substantia nigra and the formation of Lewy bodies.

A movement disorder/PD specialist should make the formal diagnosis of PD. Patients with suspected PD should be referred promptly (and untreated) to a specialist clinic.6

Key diagnostic features are bradykinesia plus one of the following symptoms:2

There is no cure for PD and current treatment does not halt or reverse the progression of the disease.

Medical management should be initiated by a PD specialist.

Treatment aims to reduce symptoms by replacing dopamine or reducing dopamine breakdown. This can happen in a variety of ways:6

Response to medication deteriorates with time and side effects may be seen such as dyskinesias (typically seen soon after taking medications due to overstimulation) or re-emergence of symptoms as each dose wears off. With disease progression and increased loss of dopaminergic cells, increasing doses of medication are needed, leading to an increased risk of side effects.

Multi-disciplinary input is a key part of the holistic bio-psycho-social management of PD. Professionals involved should include:

Deep brain stimulation is a specialised management option and not often used. It is reserved for those with severe symptoms refractory to medical management yet still fit with few co-morbidities.6

Poor mobility can lead to increased falls and resultant injuries. Reduced independence is also seen as the disease progresses and mobility deteriorates.

The risk of dementia is significantly higher in PD than in the general population, namely dementia with Lewy bodies (DLB) and Parkinson’s dementia. These syndromes present clinically and pathologically very similarly, however, the clinical timeline distinguishes them:

Hallucinations are a common complication of PD. Insight is generally good, however, if this is lost, patients can develop paranoia.

Aspiration pneumonia is frequently seen in end-stage PD as a complication of dysphagia. This increases morbidity and mortality.