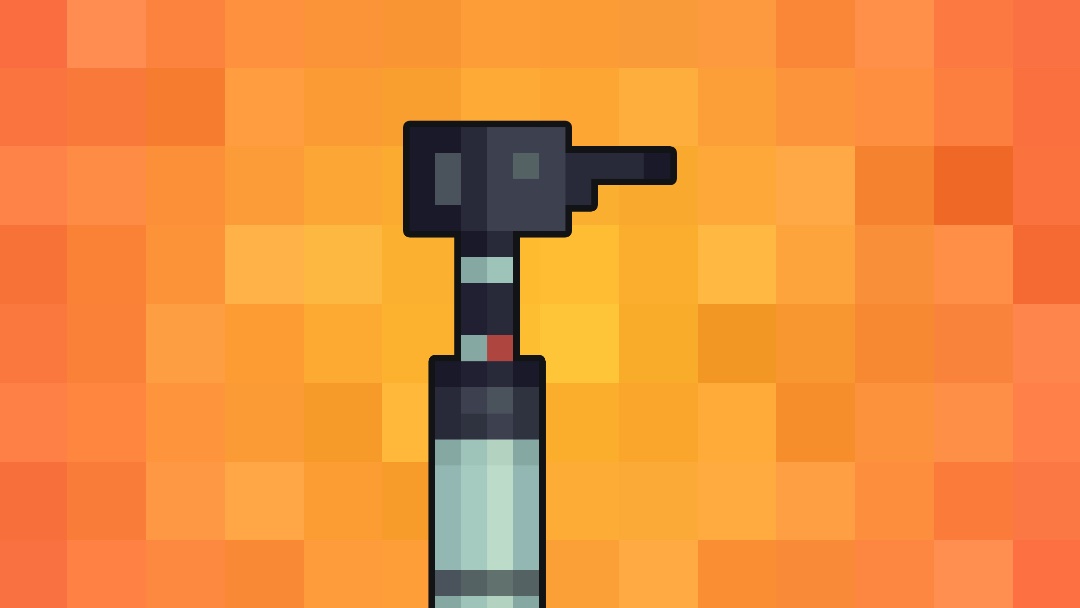 Briefly explain what the examination will involve using patient-friendly language: “Today I’d like to examine your ears, this will involve me having a look inside your ears using a special piece of equipment known as an otoscope. I’d also like to assess your hearing.”

Ask the patient if they have noticed any change in their hearing recently.

Explain that you’re going to say 3 words or 3 numbers and you’d like the patient to repeat them back to you (choose two-syllable words or bi-digit numbers).

1. Position yourself approximately 60cm from the patient’s ear and then whisper a number or word.

3. Ask the patient to repeat the number or word back to you. If they get two-thirds or more correct then their hearing level is 12db or better. If there is no response use a conversational voice (48db or worse) or loud voice (76db or worse).

4. If there is no response you can move closer and repeat the test at 15cm. Here the thresholds are 34db for a whisper and 56db for a conversational voice.

5. Assess the other ear in the same way.

Explain to the patient that you are going to test their hearing using a tuning fork.

1. Tap a 512Hz tuning fork and place in the midline of the forehead. The tuning fork should be set in motion by striking it on your knee (not the patient’s knee or a table).

2. Ask the patient “Where do you hear the sound?”

These results should be assessed in context with the results of Rinne’s test before any diagnostic assumptions are made:

A 512Hz tuning fork is used as it gives the best balance between time of decay and tactile vibration. Ideally, you want a tuning fork that has a long period of decay and cannot be detected by vibration sensation.

1. Place a vibrating 512 Hz tuning fork firmly on the mastoid process (apply pressure to the opposite side of the head to make sure the contact is firm). This tests bone conduction.

2. Confirm the patient can hear the sound of the tuning fork and then ask them to tell you when they can no longer hear it.

3. When the patient can no longer hear the sound, move the tuning fork in front of the external auditory meatus to test air conduction.

4. Ask the patient if they can now hear the sound again. If they can hear the sound, it suggests air conduction is better than bone conduction, which is what would be expected in a healthy individual (this is often confusingly referred to as a “Rinne’s positive” result).

These results should be assessed in context with the results of Weber’s test before any diagnostic assumptions are made:

Inspect the pinnae for:

Inspect the pre-auricular region (in front of the ear):

Inspect the conchal bowl for signs of active infection such as erythema and purulent discharge.

Palpate the tragus for tenderness which is typically associated with otitis externa.

Cauliflower ear is an irreversible condition that develops as a result of repeated blunt ear trauma. Blunt trauma causes bleeding under the perichondrium of the pinna, stripping away the ear’s cartilage. This cartilage normally relies on the perichondrium for its nutrient supply and as a result, once separated it becomes fibrotic, causing distortion of the ear’s architecture.

Congenital deformity of the ears

There are several types of congenital ear deformity including:

To help decide which ear to examine first:

1. Ensure the light is working on the otoscope and apply a sterile speculum (the largest that will comfortably fit in the external auditory meatus).

2. Pull the pinna upwards and backwards with your other hand to straighten the external auditory canal.

3. Position the otoscope at the external auditory meatus:

4. Advance the otoscope under direct vision. Be gentle with the otoscope and ensure movements are slow and considered otherwise you will cause discomfort.

5. Inspect the external auditory canal for:

A healthy TM should appear pearly grey and translucent.

Erythema suggests inflammation of the TM which can occur in conditions such as acute otitis media.

Bulging of the TM suggests increased middle ear pressure, which is commonly caused by acute otitis media with effusion (there is often an associated visible fluid level).

The light reflex (also known as the “cone of light”) is visible when a light is shone onto the TM.

If a TM is healthy, the cone-shaped reflection of light should appear in the anterior inferior quadrant.

In the left ear, the light reflex should be positioned at approximately 7 o’clock to 8 o’clock.

In the right ear, the light reflex should be positioned at approximately 4 o’clock to 5 o’clock.

Absence or distortion of the light reflex is associated with otitis media (due to bulging of the TM).

Note the size and the position of any perforations of the TM.

Cholesteatoma typically causes perforation in the superior part of the TM and there may be visible granulation tissue and discharge in this region.

Scarring of the TM is known as tympanosclerosis and can result in significant conductive hearing loss if it is extensive.

Tympanosclerosis often develops secondary to otitis media or after the insertion of a tympanostomy tube.

8. Repeat your assessment on the other ear, comparing your findings. If the patient has an infection in one ear, you should change the speculum on the otoscope before examining the other ear.

9. Discard the otoscope speculum into a clinical waste bin.

Acute otitis media is an inflammatory condition of the middle ear that can be caused by viruses and bacteria. Typical findings on otoscopy include a bulging red, yellow or cloudy tympanic membrane with an associated air-fluid level behind the membrane. There may also be discharge in the auditory canal if the tympanic membrane has perforated.

“Today I examined Mr Smith, a 25-year-old male. On general inspection, the patient appeared comfortable at rest and there were no abnormalities noted on inspection of the external ear.”

“Otoscopy revealed normal tympanic membranes and auditory canals. There was no evidence of hearing loss on assessment.”

“In summary, these findings are consistent with a normal examination of the ears.”