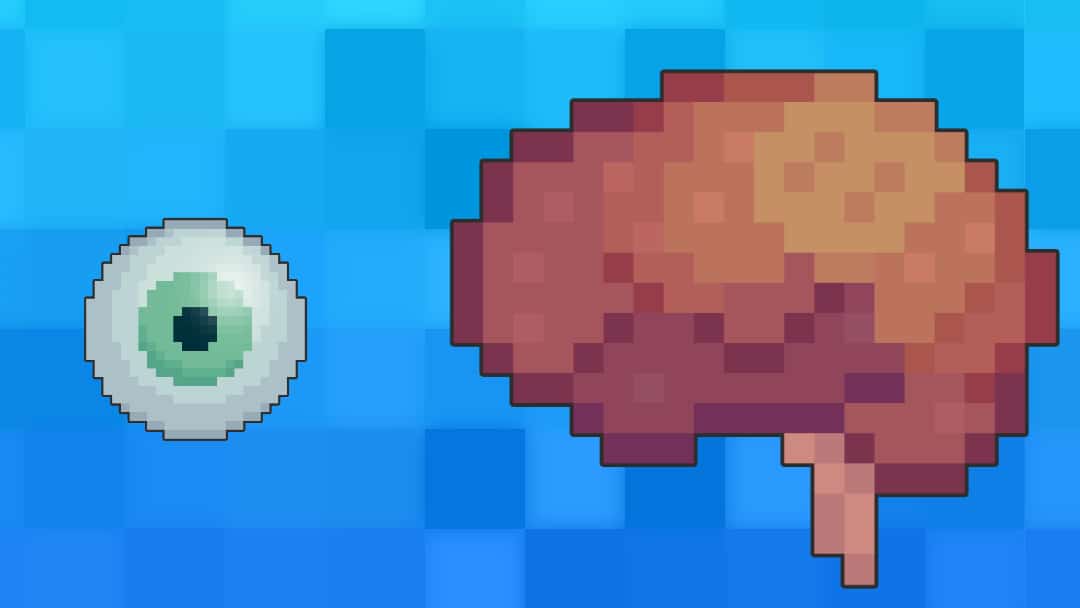 The visual pathway is the route by which retinal stimuli are transferred to the occipital cortex of the brain. It encompasses the retina, optic nerve, optic chiasm, optic radiations and the visual centre of the occipital lobe.

Understanding the anatomy of the optic nerve and visual pathways is key to appreciating how various focal lesions of the brain cause characteristic visual field defects.

When discussing vision, it is important to understand the visual field and how it differs from the image presented to the retina.

The visual field is the entire area that can be seen by a patient without movement of their head and with their eyes fixed on one point.

The image of an object in the visual field is inverted upside-down and flipped left-to-right on the retina, as illustrated in figure 1.

Confrontational assessment of the visual field is an important part of the cranial nerve examination. It can be more accurately assessed using perimetry studies.

The photoreceptors (rods and cones) in the retina are stimulated by photons of light entering the eye. Light-sensitive surface membrane proteins (e.g. rhodopsin) of these cells are stimulated to propagate second messenger responses which convert light energy into electrical signals. The photoreceptors synapse with retinal bipolar cells, which in turn transmit these signals to retinal ganglion cells.

The retinal ganglion cells converge at the optic disc, forming the optic nerve. The optic nerve then exits the eye, travelling through a defect in the lamina cribrosa of the sclera.

The optic nerve is the second cranial nerve, responsible for transmitting the special sensory information for vision. It may be considered an extension of the forebrain as it is covered by the meninges of the central nervous system, rather than by epi/peri/endoneurium like other peripheral nerves.

The optic nerve travels through the bony orbit and enters the middle cranial fossa through the optic canal, a defect in the lesser wing of the sphenoid.

Once inside the skull, the optic nerve travels along the floor of the middle cranial fossa, through the medial aspect of the cavernous sinus. Left and right optic nerves then converge at the optic chiasm.

The optic chiasm is located directly above the sella turcica of the sphenoid bone. The pituitary gland projects down immediately behind the chiasm.

At the chiasm, fibres from the nasal aspect of each retina cross over (or decussate) to the contralateral optic tract, while fibres from the temporal retina remain on their respective sides, as illustrated in figure 2.

In this way, left-sided post-chiasmal fibres pertain to the right side of the visual field, and vice versa.

The optic radiations terminate in the calcarine sulcus of the occipital lobe, where the cortical visual centre is situated.

The calcarine sulcus is responsible for retinal image processing. Here, images from both eyes are finally collated and a final image is formed. This image is inverted, as represented in figure 1. As a consequence of this, the brain has to re-invert the image so that information is correctly oriented in space.

From the occipital visual centre, signals are sent to the frontal, parietal and temporal lobes to further make sense of the input information (e.g. reading/facial recognition).

The blood supply of the visual pathway is outlined in table 1.

Lesions of the chiasm most commonly result in bitemporal hemianopia, as demonstrated in figure 4.

At the optic chiasm, fibres from the nasal half of the retina, corresponding to the temporal visual field, decussate. Lesions compressing the chiasm, such as pituitary adenomas, therefore cause bitemporal hemianopia.

Lesions affecting the calcarine sulcus of the occipital lobe tend to cause homonymous hemianopia with sparing of the macula. Macular vision is spared given the dual blood supply to the anterior portion of the visual centre (PCA and MCA).

Table 2. Lesions of the visual pathway and their respective visual field defects.