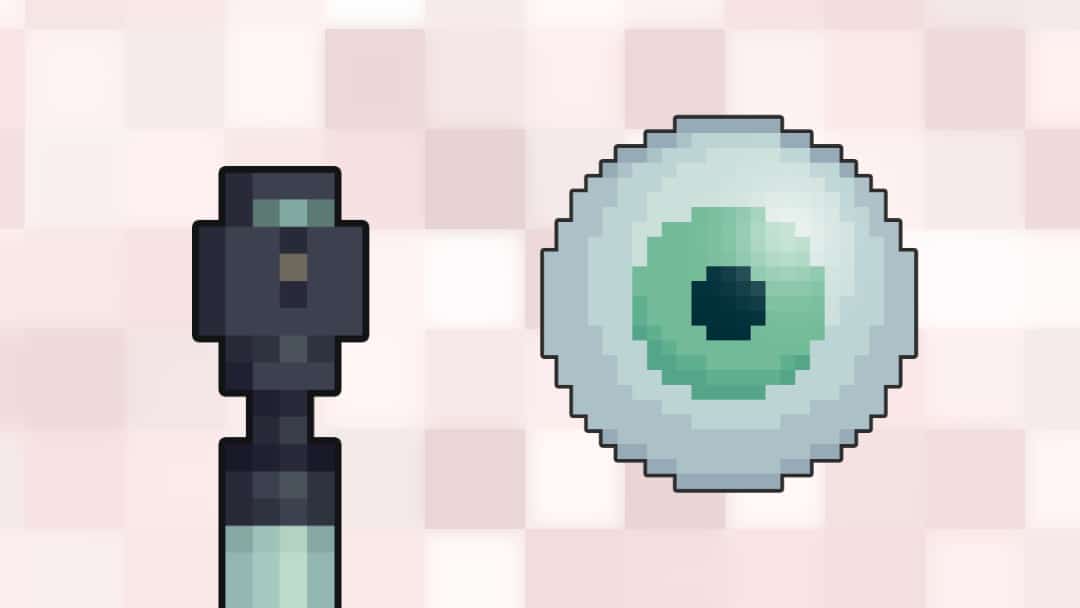 Fundoscopy (ophthalmoscopy) frequently appears in OSCEs and you’ll be expected to pick up the relevant clinical signs using your examination skills. This guide provides a step-by-step approach to performing fundoscopy. It also includes a video demonstration.

Download the fundoscopy PDF checklist, or use our interactive checklist. You may also be interested in our complete guide to the examination of the eyes and assessment of vision or our anterior segment examination guide.

“I will be using a magnifying tool called an ophthalmoscope to look at the back of your eyes with the lights off.”

“To do this, I’ll need to get quite close to your face. I’ll place a hand on your forehead to prevent us from bumping into each other.”

“I’ll also be using some eye drops to dilate your pupils. The dilating drops will cause your vision to be temporarily blurry and you’ll be more sensitive to light, so you’ll not be able to drive for several hours afterwards.”

Position the patient sitting on a chair.

Ask if the patient has any pain before proceeding.

Inspection of the external eye

Inspection of the external eyes including the anterior segment can provide a lot of valuable clinical information.

Ask the patient to look straight ahead and inspect both of the eyes assessing the following:

Note any abnormalities such as:

The pupil is the hole in the centre of the iris that allows light to enter the eye and reach the retina.

Inspect the patient’s pupils for abnormalities.

Normal pupil size varies between individuals and depends on lighting conditions (i.e. smaller in bright light, larger in the dark).

Pupils can be smaller in infancy and larger in adolescence, then often smaller again in the elderly.

Note any asymmetry in pupil size (anisocoria). This may be longstanding and physiological or be due to acquired pathology. If the difference in pupil size becomes greater in bright light such as when facing a window in daylight, this would suggest that the larger pupil is the pathological one. This is because the normal pupil will constrict in brighter light accentuating the difference in size. If the difference is more pronounced in dim lighting, this would imply the smaller pupil is abnormal as the larger pupil would then dilate while the pathologically small pupil remains the same size.

Examples of asymmetry include a larger pupil in oculomotor nerve palsy and a smaller one in Horner’s syndrome.

Pupils should be round. Abnormal shapes can be congenital or due to pathology (e.g. posterior synechiae associated with uveitis) or previous trauma and surgery.

Peaked pupils in the context of trauma are suggestive of globe rupture (the peaked appearance is caused by the iris plugging the leak).

Asymmetry in pupillary colour is most commonly due to congenital disease.

In rare cases, asymmetry of colour can suggest Horner’s syndrome, with the paler washed-out iris being pathological.

Pathology which may be noted during general inspection

Examples of pathology you may note during general inspection of the eye include:

Below is a non-exhaustive list of causes of red eye, with their associated clinical features.

Parts of the ophthalmoscope include:

Ophthalmoscopes typically allow you to select from a range of different apertures including:

Filters can be used to highlight specific pathology:

1. It is essential to darken the room for the examination. Make sure the patient is positioned seated prior to turning out the lights to avoid accidents.

2. Dilate the patient’s pupils using short-acting mydriatic eye drops such as tropicamide 1%.  You will be unable to monitor pupil reactions once dilating drops have been applied, furthermore assessing vision, colour vision, double vision and visual fields will be less accurate once drops are instilled.

3. Ask the patient to look straight ahead for the duration of the examination (asking the patient to fixate on a distant target such as a light switch can cause confusion if you then obstruct the view of this target).

The term fundal reflex is preferred over red reflex as the colour of the healthy reflex varies depending on a patient’s skin colour.

To set up the ophthalmoscope for assessing the fundal reflex adjust the diopter dial to correct for your refractive error so that you can see the patient and their eye clearly from a distance:

How to assess for the fundal reflex

1. Look through the ophthalmoscope, shining the light towards the patient’s eye at a distance of approximately one arm’s length.

2. Observe for a reddish/orange/white/yellow/blue reflection in each pupil, caused by light reflecting back from the vascularised retina.

Causes of an absent fundal reflex

Absence of the fundal reflex in adults is often due to cataracts in the patient’s lens blocking the light. Other causes include vitreous haemorrhage and retinal detachment.

Absence of the fundal reflex in children can be due to congenital cataracts, retinal detachment, vitreous haemorrhage and retinoblastoma.

To set up the ophthalmoscope for assessing the fundus, adjust the diopter dial so that it is the net result of yours and the patient’s refractive error:

2. Approaching from a 10-15 degree angle slightly temporal to the patient, move closer whilst maintaining the fundal reflex.

4. Once you identify the optic disc assess its characteristics including the contour, colour and the cup (“3Cs”):

5. Methodically assess each quadrant of the retina and the associated vascular arcades in a clockwise or anticlockwise fashion looking for evidence of pathology:

6. Finally, inspect the macula by asking the patient to briefly look directly into the light of the ophthalmoscope. The macula is found lateral (temporal) to the optic nerve head and is yellow in colour. The central part of the macula, the “fovea” is about the same diameter as the optic disc and appears darker than the rest of the macula due to the presence of an additional pigment.

Assess the other eye

Repeat assessment of the fundal reflex and fundus on the other eye. You will need to approach the patient from the opposite side and hold the ophthalmoscope in your other hand.

Video demonstration: How to visualise the fundus

If mydriatic drops were instilled, remind the patient they cannot drive for the next 3-4 hours until their vision has returned to normal.

All of the following further assessments and investigations are dependent on the patient’s presenting complaint and in most cases, none of them would need to be performed: