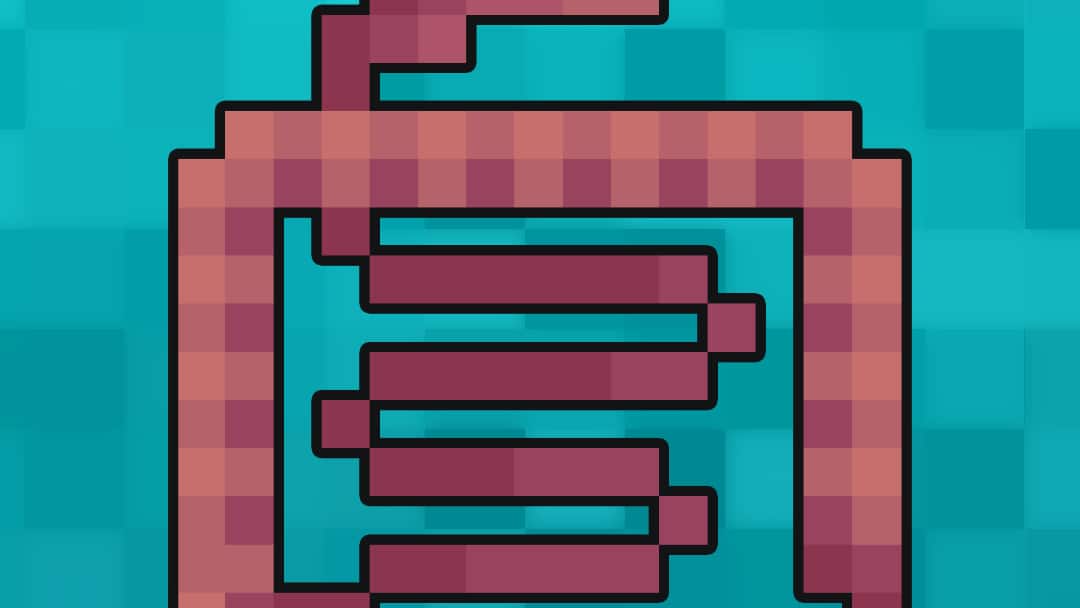 The small intestine is the primary digestive organ of the gastrointestinal tract and has an important role in aiding digestion and absorption of chyme received from the stomach.

Functions of the small intestine include chemical digestion of proteins, lipids and carbohydrates using enzymes to break down chyme into a form that can be absorbed in the small intestine across epithelial cells via simple and facilitated diffusion, and active transport.

The small intestine can be split into three structural parts: duodenum, jejunum, and ileum.

On abdominal X-ray (AXR), the diameter should not normally exceed:

This is referred to as the 3/6/9 rule. The presence of a wider diameter is suggestive of small bowel obstruction.2,3

The most common cause of small bowel obstruction is adhesions which are usually related to previous abdominal surgery. Other causes include abdominal hernias and compression by neoplastic masses within the intestinal lumen or from the abdominal cavity.4

The duodenum is the shortest part of the small intestines, approximately 20-25 cm in length. It is shaped like a ‘C’ where it surrounds the head of the pancreas.

The duodenum can be further separated into four sections:

Duodenal ulcers can develop secondary to NSAIDs or infection with Helicobacter pylori.

Symptoms include upper abdominal pain that is typically relieved by eating. In contrast, gastric ulceration tends to present with pain that worsens after eating.4

Acute complications of duodenal ulceration depend on the anatomical location of the ulcer:1

The duodenum features a simple columnar intestinal epithelium which contains goblet cells and Paneth cells. Only the duodenum contains Brunner’s glands which are important in producing alkaline mucous to neutralise acidic chyme from the stomach and in optimising the activity of intestinal enzymes for absorption.

The separation between the duodenum and jejunum is marked by the suspensory muscle of the duodenum (ligament of Treitz), which fixes the duodenojejunal flexure to the right crus of the diaphragm. This is particularly important when diagnosing incomplete rotation or malrotation on a radiological scan.

The jejunum is located between the duodenum and ileum.

The structure of the jejunum is different to the duodenum as it is longer (approximately 2.5m) and contains plicae circulares and villi which increases the absorption of sugars, amino acids, and fatty acids (products of digestion).

The ileum is similar in structure to the jejunum and is the longest portion of the small intestine, being around 3 metres long.

The main function of the ileum is to absorb vitamin B12 and bile acids. The ileum joins the first part of the large intestine, the cecum, at the ileocaecal junction.

The ileum can be differentiated from duodenum and jejunum by the presence of Peyer’s patches. These are lymphoid follicles located in the mucosa layer and extend into the submucosa layer.

Blood supply to the small intestine arises from the celiac trunk and superior mesenteric artery which are direct branches from the abdominal aorta.

The jejunum and ileum receive blood supply from the superior mesentery artery which forms arterial arcades within the mesentery. The vasa recta, the straight blood vessels from the arcade, supply the organs directly.1

Acute mesenteric ischaemia occurs when there is insufficient blood supply to the small intestine.

Acute mesenteric ischemia is a medical emergency that typically presents with severe generalised abdominal pain associated with nausea and vomiting. The condition has a high mortality rate and requires urgent revascularisation of the intestine and resection of any necrotic bowel.6

Table 1. The venous and lymphatic drainage of the small intestine.