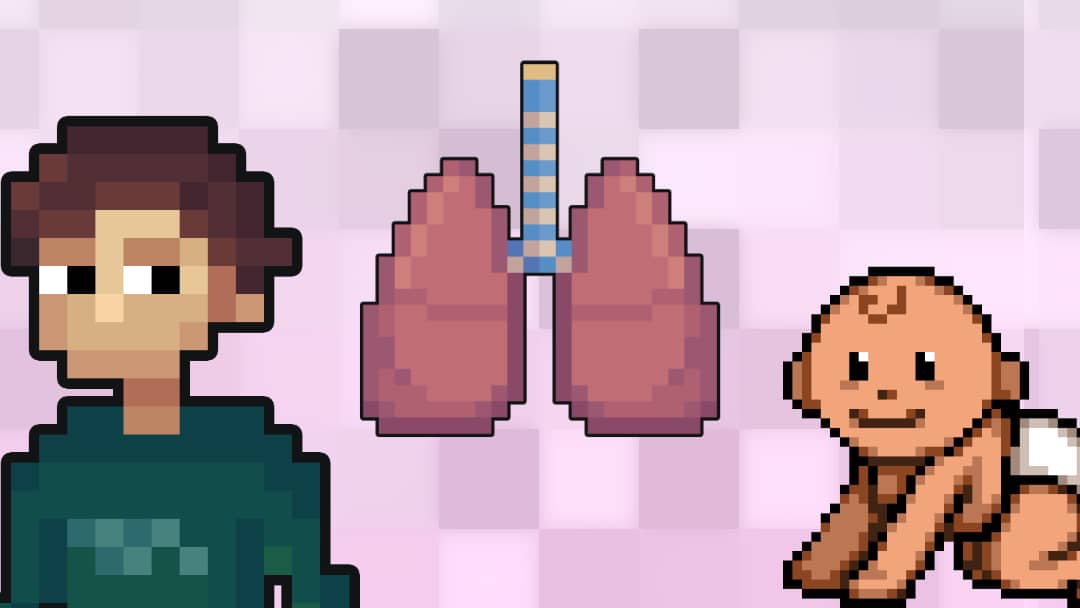 Wheezing in children is a common clinical presentation in paediatrics. It can be caused by a spectrum of illnesses including bronchiolitis, viral-induced wheeze and asthma.

Wheezing due to viral-induced wheeze or acute viral-induced asthma is caused by narrowing of the airways due to mucus production and bronchoconstriction. Other conditions can present with wheeze, and these are outlined in the differential diagnosis section.

The question often arises ‘is this asthma or viral-induced wheeze?’.

Approximately 50% of children have had at least one episode of wheezing in early childhood, however, most of these are wheeze-free by age six.1

This is due to a combination of increased exposure to viruses in early childhood and smaller airway anatomy that is more prone to cause wheezing due to Poiseuille’s law (small reduction in airway radius increases resistance to airflow as it is inversely proportional to the fourth power of the radius).

The diagnosis of asthma previously has been deferred until the child was able to perform objective testing (e.g. spirometry), typically from age 5 onwards.

However, there is a recent shift to diagnose asthma earlier in children who have recurrent episodes of wheezing along with atopic history and a pattern of symptoms indicating poor control between acute events.2

Risk factors for acute wheeze with viral infections include:

It is important to ask about prior wheezing episodes. If a previously higher level of support was required, there is greater suspicion for risk of deterioration.

A systematic examination should be performed, with an ABCDE approach.

Local guidelines should be followed regarding the classification of severity. The below system is based on a guideline by the Royal Children’s Hospital Melbourne:

Unlike asthma in adults, recording peak flow does not form a part of the initial acute assessment in children.

Wheeze is a common symptom of viral-induced wheeze and asthma exacerbation but can also reflect alternative underlying diagnoses that must be considered.

Differential diagnoses to consider include:2

For example, a chest x-ray would be considered if there are focal signs on auscultation despite treatment, to exclude pneumonia/foreign body.3

In addition, investigations are used in the assessment of severe or life-threatening asthma to aid in the monitoring of the condition.

Arterial blood gasses are not used routinely in children. If required, a venous blood gas or capillary blood gas can provide information regarding acid/base status, CO2 level, lactate and potassium.3

In the case of severe or life-threatening cases, consider a chest x-ray to ensure no additional treatable diagnoses (e.g. pneumonia or pneumothorax).

Management of acute viral induced wheeze and viral exacerbation of asthma is dependent on the severity.

Escalating therapy might be required if a patient who presents as lower severity deteriorates or does not respond to initial therapy, this may require input from a senior clinician.

Local management guidelines should be followed. The management below is based on a guideline by the Royal Children’s Hospital Melbourne:

A 2013 Cochrane review found that metered-dose inhalers (MDI) via spacer performed at least as well as nebulisation.

This applied to mild-moderate wheezing episodes, as severe and life-threatening episodes may still require nebulisers.

Decisions around discharge depend on severity and response to therapy administered.

Discharge home may be considered if the patient is clinically stable on 3-hourly salbutamol, clinical signs are within normal limits for age, early follow up plans have been arranged and education has been delivered to parents including an asthma action plan and safety-netting.3

The parents must be comfortable with the discharge plan and feel confident to action this at home.

Admission will be required to the ward for ‘stretching of salbutamol’ if the patient does not meet the above criteria.

Transfer to tertiary care or PICU in cases of severe or life-threatening, requiring IV infusions or respiratory support (such as CPAP or intubation).

The role of steroids in viral-induced wheeze is debated.

Steroids certainly have a role in acute asthma exacerbation, and there is recent evidence that steroids may decrease the length of hospital stay for younger children with mild-moderate viral-induced wheeze (severe and life-threatening were excluded from the study).

Further research is yet to conclude the role of steroids in community-managed viral-induced wheeze.6

Complications can occur because of the underlying disease or treatment.