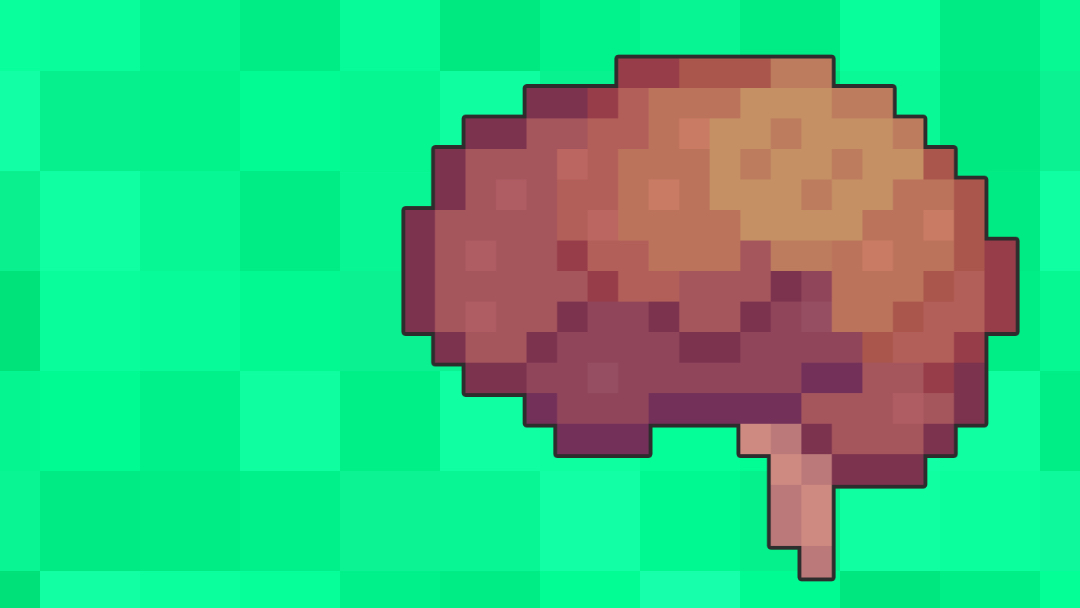 Extradural haematoma (EDH) is defined as an acute haemorrhage between the dura mater and the inner surface of the skull.

Patients most commonly affected by extradural haematomas (EDH) are adult males between the ages of 20 – 30.

An extradural haematoma is commonly caused by skull trauma in the temporoparietal region, typically following a fall, assault or sporting injury. An EDH is associated with a skull fracture in 75% of cases.

The pterion is an anatomical landmark where the parietal, frontal, sphenoid and temporal bones fuse. The pterion is particularly vulnerable to fracture as the bone at this location is relatively thin.

EDH can also occur secondary to the rupture of a vein, particularly if the middle meningeal vein or dural sinuses are involved.

As the volume of blood leaking from the damaged blood vessel into the extradural space increases, it begins to strip the outer layer of the meninges, the dura mater, away from the skull.

This often leads to the lemon-shaped haematoma, which is visible on CT and MRI imaging.

If the extradural haematoma continues to increase in size, the pressure inside the cranium (intracranial pressure) also increases. Without treatment, this increased pressure can cause damage to the brain through midline shift (displacement of the brain) and tentorial herniation (Figure 2).

A rising level of intracranial pressure (ICP) will eventually lead to brainstem death.

Typical symptoms of EDH include:

Typical clinical findings in EDH may include:

Cushing’s reflex is a physiological response to raised ICP to attempt to improve perfusion.

It leads to a triad of:

The primary feature on a CT head in the context of EDH is a bi-convex “lemon-shaped” mass (rather than the typical “banana-shape” associated with subdural haemorrhages). This characteristic lemon shape develops due to the haematoma expanding medially due to being unable to expand past the points at which the dura is tightly bound to the suture lines of the skull.

Secondary features on a CT head can include midline shift and brainstem herniation, both of which are indications for early surgical intervention.

MRI head has little benefit over CT and takes much longer to perform the scan, making it less ideal in the acute context.

MRI can be used in the sub-acute setting to assess for evidence of underlying cerebral contusions, ischaemia or diffuse axonal injury.

Skull X-ray is not typically used in the investigation of EDH however if a skull fracture is noted on a skull X-ray a CT head should be performed urgently to assess for evidence of EDH.

Cerebral angiography may be used in the sub-acute setting to assess for an underlying arteriovenous malformation which may be the cause of the EDH (e.g. if there was no history of trauma).

Sub-types of intracranial haemorrhage differ in their clinical presentation and radiological appearance.

The table below provides a brief summary of the different types of intracranial haemorrhage including their typical clinical features and appearance on CT. 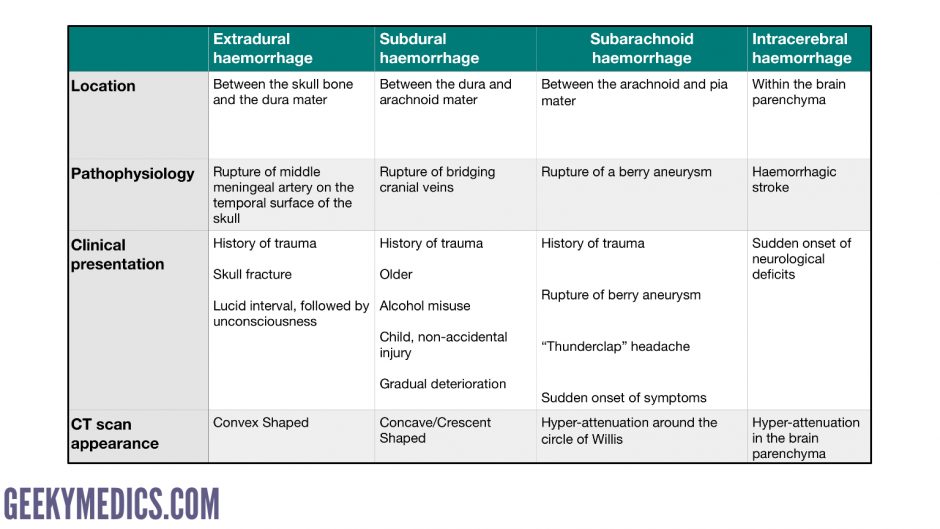 Initial management of a patient with a suspected EDH should follow an ABCDE approach to ensure the patient is stable before considering further management options.

All patients on anticoagulation (e.g. warfarin) will require reversal agents to prevent further bleeding and extension of the EDH. Local guidelines for anticoagulation should be followed, with input from haematology if required.

Patients who are found to have a coagulopathy (e.g. prolonged PT, thrombocytopenia) need to be discussed with haematology for advice on appropriate treatments (e.g. fresh-frozen plasma, platelet transfusion).

Prophylactic antibiotics may be administered, particularly in the context of an open skull fracture to reduce the risk of intracranial infection.

Patients presenting with acute EDH are at an increased risk of developing seizures and therefore may be temporarily commenced on anticonvulsant medication to prevent seizures (e.g. levetiracetam, phenytoin).

Mannitol may be used intravenously to help temporarily decrease ICP (via an osmotic effect) prior to surgical management.

Barbiturates may be used to help reduce ICP and to protect the brain from anoxia.

The choice of definitive management differs depending on the location, age, size and clinical features of the bleed.

Conservative management may be appropriate if the bleed is very small with minimal mass effect (i.e. midline shift).

A trauma craniotomy is typically used in the context of acute EDH with significant mass effect to both evacuate blood, treat the cause of bleeding (e.g. ligation of a vessel) and reduce intracranial pressure.

If there is a large bleed and/or a lot of associated cerebral oedema hemicraniectomy (also known as a decompressive craniectomy) may be performed in an attempt to prevent brain stem herniation and death due to rising intracranial pressure.

Patients require close observation during the post-operative period, including regular neurological observations. The aim is to prevent any secondary insults (e.g. oedema, ischaemia or infection).

Complications of EDH include:

Most patients with an extradural haematoma, even if large, have a good prognosis if they receive early evacuation of the haematoma. However, the prognosis worsens significantly if surgical intervention is delayed.

Clinical features associated with a poorer prognosis include: